The Tizcan Host is a thrallband of the Thousand Sons Traitor Legion. The Tizcan Host is known for its shared delusion. Every one of its Sorcerers believes he passed from mortality entirely at the time of the casting of the Rubric of Ahriman, and that he has been reborn as an avenging angel. The host still believes it has but one duty -- to rain the righteous fire of the Crimson King Magnus the Red upon the Imperium that once dared cast him out. Though they pretend to superior, otherworldly goodness, the Tizcan Host is perhaps the most warlike thrallband of all.

The followers of the Tizcan Host are known as the Choir of Eagles. This is a term that dates back to the Great Crusade, when sweet music echoed through every Thousand Sons processional. The harsh squawks and cries of their mutant followers, the Tzaangors, are a grotesque mockery of the songstrels that came before, yet they still wear the same colours as their predecessors.

The Tizcan Host thrallband's colours are azure trimmed in gold. Members of this thrallband often wear the colour white, which was associated in the culture of lost Prospero with purity and soundness of spirit. These are claims that grow more dubious with every passing Terran year, for that sacred white has been stained red with blood countless times over the millennia. The Tizcan Host are also known to incorporate aquamarine, the colours of the enlightened seer. The Rubricae of this thrallband, known as the Seraphya, stand in silence as the icons of their masters are scorched into their armour and tabards before each battle. The Sorcerers of the Tizcan Host tell themselves the uncanny stillness of the Rubricae is because of their vow of secrecy and their stoic demeanour, but the truth is far more disturbing.

The Tizcan Host thrallband's symbol is a yellow sigil of the Cult of Magic -- known as the Horned Crown -- that is a reference to the circlet worn by the ancient Prosperine deity known as the King of All Angels.

Examples of the Tizcan Host thallband's shoulder pauldrons which bear both the Thousand Sons Traitor Legion's iconography as well as that of the Horned Crown, worn by all of its members

A Tizcan Host Magister Templi, Daathar Molocriz; the stylised wings that unfold from the Magister shine with blinding light as he levitates above the throng.

A Tizcan Host Exalted Sorcerer, Alahadz Dratho Manac; note that Manac wears the colours of the enlightened seer, but is both single-minded and murderous. 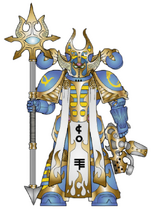 A Tizcan Host Chaos Sorcerer. Once a psyker-priest of the Magna Templa, the Sorcerer Xarax Throtep nopw only wants to see Humanity burn for its crimes against the Thousand Sons.

A Tizcan Host Sekhmet Scarab Occult Terminator; the numerical sigil worn on the tabard and shoulder of Holy Xepthis denotes him as the fifth of his name.

A Rubricae of the Tizcan Host stands ready to do his sorcerous master's bidding. 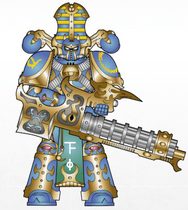 A Tizcan Host Legionary bearing a heavy weapon, blessed with the Mark of Tzeentch upon its housing.

A Tzaangor that serves the Tizcan Host thrallband.
Add a photo to this gallery
Retrieved from "https://warhammer40k.fandom.com/wiki/Tizcan_Host,_The?oldid=321252"
Community content is available under CC-BY-SA unless otherwise noted.