"We are all but a weapon in the right hand of the Emperor."

Titan Weapons are a family of massive-sized weapons carried by Titans, any one of several classes of massive, crewed, robotic bipedal combat walkers fielded by the Titan Legions of the Adeptus Mechanicus' Collegia Titanica or by the forces of Chaos' Dark Mechanicum.

Titan weapons are designed differently to weapons used on vehicles or by the standard Astra Militarum infantry squad, only scaled up to a much larger scale.

They are designed to last, to sustain massive amounts of damage that would destroy most ordinary armoured vehicle-mounted weapons, and continue to keep working.

The firepower of a Titan's weapons is related to the size and power output of its plasma reactor.

Titans can carry a mixture of weapons into battle. This is known as a weapon configuration. Titans are designed so that weapons can be equipped to suit the mission it has to accomplish.

The size of the hull determines how many weapon locations or "hard points" the Titan will have, as well as its speed. Larger hulls can carry more weapons, but are slower due to their increased weight.

The categories of weapons which may be fitted depend on the hard points; for example, the hard points on a Warhound-class Titan cannot mount very heavy weapons or missile mounts.

All Titan weaponry is interchangeable, and a weapon can, for example, be taken off a Warlord-class Titan and mounted straight onto a Warhound. However, a weapon's effectiveness will change according to the size of Titan it is fitted to.

Considering the awesome arsenal available to a Titan Legion, selecting the most appropriate weapon combination is of the utmost importance, whether they are hunting down enemy Titans or annihilating enemy infantry formations and tanks. With a Titan war maniple this choice take on a further dimension, as each Titan in the maniple can be tailored to specific roles which can enhance the others' strengths and cover up their deficiencies.

There are only three basic possibilities for a Titan weapons configuration -- these are the Heavy Support Titan, Close Support Titan and Assault Titan varieties. A Heavy Support Titan is mostly armed with long-range weapons, and perhaps some kind of one-shot missile system like a Vortex Missile. It will also mount at least one "Titan-killing" weapon, such as a Warp Missile, Plasma Destructor or Volcano Cannon.

An Assault Titan bears the shortest-ranged weapons, such as Vulcan Mega Bolters, Inferno Guns and Melta Cannon and as its name suggest is designed for assaulting enemy positions.

A common tactic for a Titan war maniple is to include a mix of a Heavy Support Titan, a Close Support Titan and an Assault Titan. This is a flexible formation which allows the maniple to act and react, no matter what the enemy army consists of.

However, some Imperial tacticians have found this mix of Titans to be a bit half-hearted and reactionary. The Titans can cope with many things, but performing a decisive action on the battlefield becomes a much harder task.

All Titan maniples contain at least one weapon which can destroy buildings, such as a Quake Cannon or Multiple Rocket Launcher or Apocalypse Missile Launcher. This enable the maniple to open up lines of sight to enemy Titans and tanks, and deny cover to the opposing infantry troops on the ground.

The power and size limitations of a Warhound Titan greatly reduces the number of possible weapon variations. Warhounds are typically used in two roles when not acting as scouts or outriders.

Their speed allows them to hit deep into enemy territory to capture objectives and push back opposing infantry and light armoured vehicles.

Alternatively, their greater manoeuvrability allow them to make excellent Titan hunters, stalking the larger and more unwieldy Titans of an enemy force. This allows the Warhounds to fire upon the thinner armour of a Titan's sides and flank, attacking from an unexpected quarter and spreading fear and confusion.

A Warhound "Hunter" detachment is fairly widespread throughout the Titan Legions. The Hunter detachment is outfitted for Titan-hunting, allowing the Warhounds to stalk and destroy opponents many times their size and bearing up to twice their combined firepower.

The Plasma Blast Gun and Turbo-Laser Destructors of the detachment are powerful enough to damage any Gargant or Battle Titan, especially if firing upon the side or rear armour of the target. The Vulcan Mega Bolter is ideal for cutting into enemy troops, either as protection against a mass infantry assault or after the detachment's primary mission is achieved.

The Warhounds do not rely on their armour and void shields to protect them, instead they try to remain in cover and stay out of their target's weapon arcs.

Individual Titans can also be used as a Titan hunter-killer in a similar way to Warhound detachments. Warlord-class Titans are on the whole too slow for this task, but against Ork Gargants, which are even slower than Warlords, they can be quite effective.

A Warlord mounting a Warp Missile, Volcano Cannon, Gatling Blaster and a close combat weapon can deal out quite a lot of punishment. Against Aeldari and Chaos Titans, which are faster, and in the case of the Aeldari, highly manoeuvrable, a Reaver-class Titan is probably more suitable.

When fighting against the Aeldari, a Multiple Rocket Launcher, Apocalypse Missile Launcher or Barrage Missile is essential, as these weapons can be used to destroy a Phantom or Warlock Titan's holo-field wings, leaving it very vulnerable to attacks from other weapons.

The Quake Cannon is also very useful Titan hunting weapons. Its power to destroy buildings denies the target the option to getting under cover.

The weaponry carried by Titans is usually dedicated to certain tasks based on the tactical and strategic conditions.

Some weapons are designed for targeting high-priority and well-armoured enemies, such as fortresses or armoured divisions, whilst others are particularly effective against legions of troops or laying down devastating artillery barrages.

Scout Titan Weapons are weapons normally fitted to light Titans such as the Warhound. Rarely found on the largest Titans, and usually of short range, these are designed to destroy light to medium vehicles quickly, and to deal effectively with huge masses of infantry.

Battle Titan weapons have more destructive and longer-ranged weapons than Scout Titans, which are commonly mounted on Reaver and Warlord Titans. Most are designed to destroy other Titans, engage enemy detachments, or bring devastation to fortifications.

Over the long centuries before the 41st Millennium, the Adeptus Mechanicus developed a large number of other weapons and add-ons for their Titans.

Most of these weapons are only effective in a given situation or for a given task, hence they are seldom made part of a Titan's standard payload. 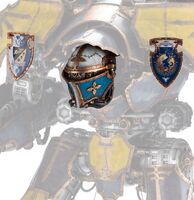 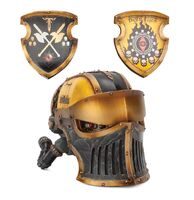 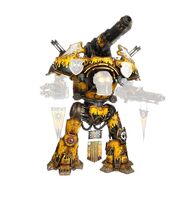 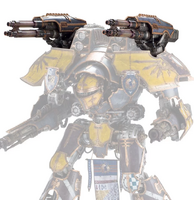 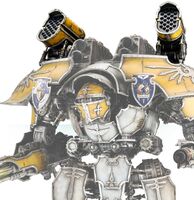 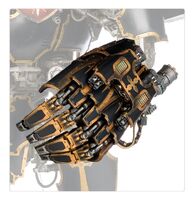 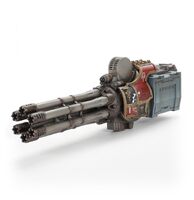 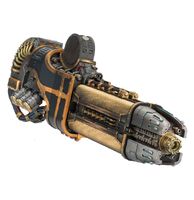 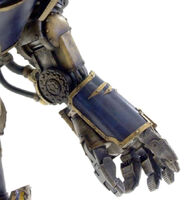 A Power Fist mounted upon a Reaver-class Battle Titan 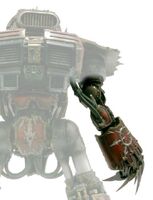 A Power Claw mounted upon a Chaos Reaver-class Battle Titan 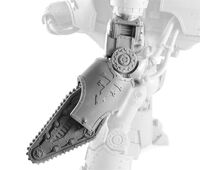 A Chainfist mounted upon a Reaver-class Battle Titan 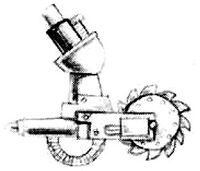 A Power Saw mounted upon a Reaver-class Battle Titan's arm 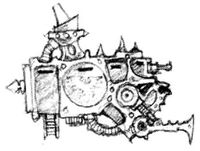 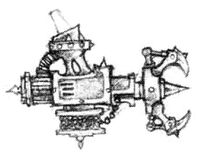 A Trident weapon mounted to a Reaver-class Battle Titan 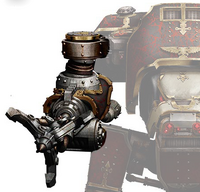 An Ursus Claw mounted upon the arm of a Warhound Titan. 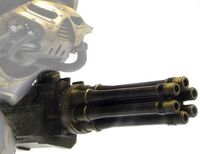 A Gatling Blaster mounted upon a Reaver-class Battle Titan 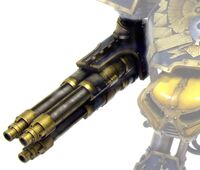 A Laser Blaster mounted upon a Reaver-class Battle Titan 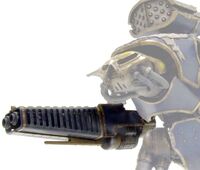 A Melta Cannon mounted upon a Reaver-class Battle Titan 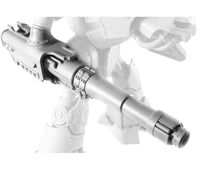 A Volcano Cannon mounted upon a Reaver-class Battle Titan 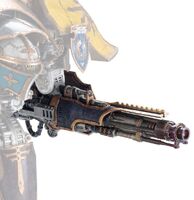 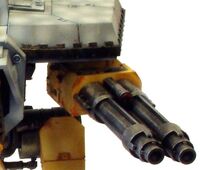 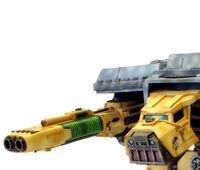 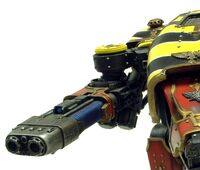 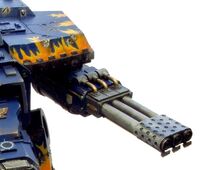 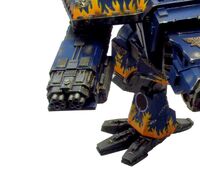 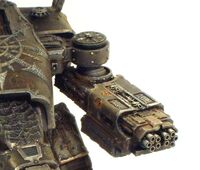 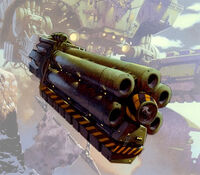 A massive Hellstorm Cannon mounted upon a Warlord-class Battle Titan

A carapace-mounted Warp Missile rack on a Reaver Titan.

A sketch of a carapace-mounted Warp Missile rack on a Reaver Titan. 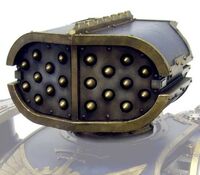 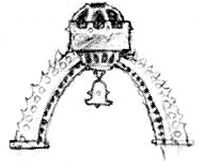 Rubble Claws affixes to a Warlord-class Battle Titan's foot
Add a photo to this gallery
Retrieved from "https://warhammer40k.fandom.com/wiki/Titan_Weapons?oldid=360792"
Community content is available under CC-BY-SA unless otherwise noted.