The Tigers Argent is a Loyalist Chapter of Codex Astartes-compliant Space Marines of unknown Founding and origin.

It aided the Imperial Angevin Crusade that conquered the Calixis Sector of the Segmentum Obscurus for the Imperium of Man in the early 39th Millennium.

The Chapter's homeworld is known as Icefang. With this world perilously close to the Great Rift as well as the Pariah Nexus, the Tigers Argent are extremely hard-pressed.

Their battered strike forces have repulsed incursion after incursion from the Cicatrix Maledictum and have yet to be defeated.

Icefang has become a beacon of hope for Humanity in the region, drawing all manner of refugees and scattered Imperial military forces to the world seeking sanctuary.

Tigers Argent wear metallic silver power armour, including the Aquila or Imperialis on the chest guard, with the exception of the the shoulder plate insets, which are black.

A black High Gothic numeral is stenciled in the centre of the squad specialty symbol, indicating squad number.

The iconography and colour on the right knee guard indicates company number in accordance with the Codex Astartes.

The Tigers Argent's Chapter Badge is the profile of a silver tiger's head, centred on a field of black. 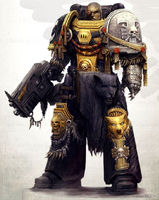 Brother Pardis of the Tigers Argent during his secondment to the Deathwatch, before his internment within a Deathwatch Dreadnought. 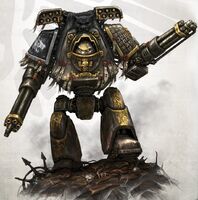