The Tau Tiger Shark AX-1-0 is a new, experimental variant of the standard Tiger Shark fighter-bomber. The Tiger Shark AX-1-0 is a dedicated ground attack aircraft that carries ferocious firepower, and was developed in response to encounters with the Imperium of Man's Titans and super-heavy tanks. In field tests during the Taros Campaign, the AX-1-0 proved extremely effective at serving as a Titan-buster for the Tau military forces. However, the aircraft is a large and comparatively cumbersome aircraft, and so is always deployed with a fighter escort for its own protection. This is partly due to the AX-1-0's potent weaponry making it a priority target for enemy pilots and anti-aircraft crews.

The Tiger Shark AX-1-0 is a variant of the standard Tiger Shark that replaces its twin-linked Ion Cannons and Drone deployment rack with devastating twin-linked Heavy Railguns. The AX-1-0 variant still retains the twin-linked Missile Pods and ability to launch Seeker Missiles.

It is believed that the AX-1-0 was developed to serve as a response to the threat posed by the largest classes of Imperial Titans. Until the Taros Campaign, the Tau had few weapons capable of stopping the Imperium's greatest war engines, but the Air Caste and the Earth Caste secretly developed the AX-1-0 using the standard Tiger Shark chassis and first fielded it on Taros. During the Imperial breakthrough on Taros at the Iracunda Isthmus, a single Tiger Shark AX-1-0 came in low towards the Imperial force and fired off a salvo of Missiles that overloaded the Void Shield generators of the Warhound-class Titan Advensis Primaris. Shots from the AX-1-0's Heavy Railguns penetrated the centre of the Titan's hull, causing the critically damaged war machine to stagger and fall. Shocked Imperial commanders had thought their mighty combat walkers impervious to all but a Manta's firepower. However, the Tau suddenly possessed a new tactical weapon capable of destroying Titans. The wreckage of the Advensis Primaris in the sands of Taros, its High Princeps Jernay slain by the Titan's agonised screams of pain through its Mind Impulse Unit, was dire proof of the Tau's new Titan-hunting capability. The remaining three Titans present at Taros withdrew rather than face another strafing run from the AX-1-0, especially since their mission to assist the 114th Cadian Shock Troopers in moving to the north had been successfully completed.

Since its first success, the AX-1-0 has seen service with other Tau Air Cadres supporting the Third Sphere Expansion. As yet, the Tiger Shark AX-1-0 has not been encountered in large numbers by the armed forces of the Imperium, and have only been used in special missions against specific hard targets that other Tau weaponry is ill-suited to engaging; such as enemy command and communication bunkers, hardened weapon positions, missile silos, and super heavy vehicles. At least eight of these aircraft were identified during the Tau's raid on Typha IV, the largest deployment of this potent Titan-buster as yet.

The Tiger Shark AX-1-0 is armed with twin-linked Heavy Railguns, as well as twin-linked Missile Pods built into the aircraft's chassis. A Drone intelligence-controlled Burst Cannon is also mounted on each wing to provide extra firepower. The AX-1-0 is also armed with a Networked Marker Light and can be upgraded to launch a payload of up to six Seeker Missiles. Tiger Shark AX-1-0s are also equipped with a Targeting Array to improve accuracy.

The Tiger Shark AX-1-0 was developed by the Tau Air and Earth Castes as a direct response to the Imperium's massive Titan war engines. Since it is a relatively new weapon system that has yet to be fielded in large numbers, it can only be surmised from the deployment of the prototype at Taros that the use of Seeker Missiles to weaken a super-heavy tank or Titan before a finishing blow from the aircraft's Heavy Railguns is delivered is the main tactic the AX-1-0 will use in the future when providing heavy air support to Tau ground forces. However, because the aircraft can be armed with a Seeker Missile array, the aircraft can also provide long-range artillery support to forward Tau Pathfinder Teams carrying out reconnaissance missions. The use of the aircraft's Networked Marker Light system also allows the AX-1-0 to designate its own Seeker Missile targets.

The Tiger Shark AX-1-0 can also be equipped with any of the following Tau vehicle support systems: 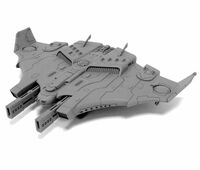 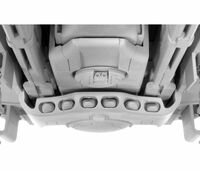 Front, dorsal and starboard schematics of a Tiger Shark AX-1-0

A Tiger Shark AX-1-0 of Air Cadre El'Acuvah, from the Ksi'm'yen Sept
Add a photo to this gallery
Retrieved from "https://warhammer40k.fandom.com/wiki/Tiger_Shark_AX-1-0?oldid=322177"
Community content is available under CC-BY-SA unless otherwise noted.