The Tiger Shark is a large Tau fighter-bomber. Often encountered flying in support of Tau Hunter Cadres during major operations, it is faster and more manoeuvrable than the Imperium's direct equivalent -- the Marauder Bomber -- but the Tiger Shark lacks the large bomb payload of the Imperial aircraft. Tiger Sharks are never as numerous on the Tau battlefield as the Barracuda, but has many features and systems in common with it. All Tiger Shark crew come from the Tau Air Caste, giving them the natural advantage of superior three-dimensional awareness and tolerance for higher accelerations than a human pilot.

The Tiger Shark's main role is the deployment of Drones into combat. The aircraft's Drone racks can deploy a shower of remote weapons platforms anywhere over the battlefield. Tiger Sharks are commonly armed with twin-linked Ion Cannons and wing-mounted Missile Pods for ground attacks, as well as Drone-controlled Burst Cannons for defence against enemy fighters, although a flight of Tiger Sharks will usually also be accompanied by Barracudas that provide fighter cover. More recently, Tiger Sharks armed with multiple Seeker Missiles have also been encountered. Like the Barracuda, different the Air Caste of different Tau Septs may operate slightly different versions of the aircraft.

Tiger Shark aircraft serve in the fighter-bomber role for the Tau Air Caste and are commonly utilised as air support for ground forces. They are usually escorted by Barracuda interceptors into battle, which provide needed fighter cover. The many roles that Tiger Sharks perform include: the deployment and dispersal of Drone reinforcements to aid Tau ground forces while in flight, the deployment of Aerial Drone Mines in airspace to hinder enemy aircraft movement, bombing enemy forces, acting as an aerial Seeker Missile platform, and the deployment, command and control of Remora Drone Stealth Fighters while they make their assault. Gun Drones are often deployed by a Tiger Shark as relatively expendable units behind the enemy lines where they can sow confusion, simulate offensives and generally cause havoc. Once Tiger Sharks have completed their primary mission, they will either head back to their base for refuelling and rearming or stay in the battle, providing aerial fire support and strafing enemy ground formations with their Ion Cannons and Missile Pods. Sometimes, Tiger Sharks are the only support Pathfinders will receive while operating deep behind enemy lines, and stand ready to fire their Seeker Missiles at a marked target at a moment's notice. Tiger Sharks armed with Seeker Missiles commonly remain as air support for ground forces which can use their own Marker Light systems to guide the Seeker Missiles launched from a Tiger Shark at enemy targets.

During the Taros Campaign, the Tiger Shark was used to support the Tau's rapid response force. Flying from well-hidden bases on the continent of Iracunda Isthmus, Tiger Sharks were often the first Tau forces to respond to the Imperial Guard's advances, quickly seeding an area with Drone squadrons, whilst other Tau ground forces were moved into place. Tiger Sharks were the first Tau forces to reach Hydro-Processing Plant 23-30 after the Elysian Drop Troops' surprise attack, quickly reinforcing the garrison with Drone squadrons. Efforts by the Adeptus Mechanicus to recover damaged Tiger Shark aircraft from Imperial battlefields have been met by fierce resistance by Tau forces, as well as certain Puritan elements of the Inquisition, who have no desire to see Mankind pollute itself by trying to reverse-engineer xenos technology.

Tiger Sharks are armed with twin-linked Ion Cannons, twin-linked Missile Pods, two Burst Cannons, a Targeting Array and three Drone deployment racks that can carry up to fourteen Gun Drones as standard. Some Tiger Sharks forgo the use of a Drone rack in favour of six Seeker Missiles while others modify the Drone rack to carry Aerial Drone Mines or two Remora Drone Stealth Fighters.

Tiger Shark aircraft have two crew members, a pilot and a navigator/ weapons operator. The Tiger Shark cockpit also serves as an escape pod, which can detach from the aircraft's fuselage in an emergency, and has limited gravitic mobility to bring the crew safely back to the ground. The Tiger Shark chassis is made of the same unknown nano-crystalline alloy used in many other Tau vehicles, and also shares the same swept wing design of many other Tau aircraft. Tiger Sharks feature a large holding bay that is commonly outfitted with a Drone deployment rack for the transportation of Drones to the battlefield. However, there are variants of the Tiger Shark that use the bay as storage for bombs while the AX-2-2 variant uses a special Drone deployment rack specifically designed to house two Remora Drone Stealth Fighters. Some Tiger Sharks forgo the use of a holding bay in favour of a missile rack that can hold up to six Seeker Missiles.

Tiger Sharks can also be equipped with any of the following Tau vehicle support systems:

A pair of Tiger Sharks in flight 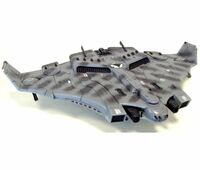 Front, dorsal and starboard schematics of a Tiger Shark

A Tiger Shark part of the Dal'yth Defence Force

A Tiger Shark of the Tau Sept of Fi'rios

A Tiger Shark deployed during the Koloth Gorge Massacre on Nimbosa

A Tiger Shark of Air Cadre El'Kaia, from the Ksi'm'yen Sept

A Tiger Shark of Air Cadre El Ao'rata, from the Ksi'm'yen Sept
Add a photo to this gallery
Retrieved from "https://warhammer40k.fandom.com/wiki/Tiger_Shark?oldid=322226"
Community content is available under CC-BY-SA unless otherwise noted.