The Tiger Claws was a former Loyalist Space Marine Chapter descended from the Astral Claws Chapter. Declared lost in 280.M40 and effectively a dead Chapter, a lone Astartes Strike Cruiser of the Tiger Claws reappeared in 680.M41 after having been trapped in the Warp and subjected to severe time distortion.

Their homeworld having been rendered lifeless and their Chapter an all-but-forgotten legend, the acting Chapter Master of the Tiger Claws travelled to Terra to petition for the release of the Chapter's gene-seed in an effort to rebuild the lost Chapter.

But the Tiger Claws' envoy subsequently disappeared without trace while awaiting the Senatorum Imperialis' answer to the Chapter's request and it was thus summarily dismissed.

It was discovered in 908.M41 that during the conflict known as the Badab War the Astral Claws Chapter Master Lufgt Huron had deliberately withheld his Chapter's gene-seed from the Adeptus Mechanicus' regular gene-tithe in order to help save its kin in the Tiger Claws Chapter, the last remnants of which had secretly sought sanctuary with the Astral Claws.

Huron and his fellows hid these Astartes within the Astral Claws' own ranks. Only 200 Astral Claws survived the final Imperial assault upon their homeworld of Badab Primaris during the Badab War in 912.M41, and these Astartes, all corrupted by Chaos, fled with the maimed body of their leader into the Maelstrom, where they founded a new Renegade Space Marine warband known as the Red Corsairs.

The Red Corsairs proceeded to carve out their own Renegade empire within this hellish realm. It is possible that some of these corrupted Astral Claws brethren were in fact Tiger Claws, and these Astartes now survive amongst the Red Corsairs.

In 680.M41, far distant from the Maelstrom Zone, a sequence of events was later to prove to have dreadful ramifications for the Astral Claws Chapter. The Bakasurra, a Strike Cruiser belonging to the Tiger Claws Chapter, reappeared on the edge of the Segmentum Pacificus, containing over a hundred Battle-Brothers of a Chapter declared destroyed ca. 280.M40, over fourteen centuries before.

The ship appeared to have been subject to severe time distortion in the Warp, and for those on board no more than a few solar months had elapsed. After making contact with a Storm Wings Chapter strike force and aiding them in battle against Drukhari slavers, the Tiger Claws were resupplied and made their way back to the location of their fortress-monastery on the world of Krodha.

There they found that in their long absence their ancient sun had expanded and rendered their world a lifeless, irradiated husk, and that their Chapter was nothing more than an all-but-forgotten legend.

Captain Vetala of the Tiger Claws, now the de facto master of what was effectively a dead Chapter, travelled to Holy Terra to petition for the release of the Chapter's gene-seed and the right and title to rebuild the Tiger Claws.

Captain Vetala disappeared without a trace while awaiting his petition's hearing before the High Lords of Terra and as a result his suit was summarily dismissed.

The Bakasurra, last seen conducting operations in the region of the Chapter's dead homeworld, could not be located by voidships sent to the area to track the remaining Tiger Claws down.

Centuries later, it was discovered that the Astral Claws' hubris had resulted in their decision to secretly absorb the remnants of their long-lost Successor Chapter into their ranks at the time of Vetala's original petition.

The addition of the Tiger Claws to his Chapter ultimately led to Lufgt Huron's dreams of expanding his Chapter into a force with the strength of one of the Space Marine Legions of antiquity, in order to pacify the Maelstrom permanently and crush Mankind's enemies.

Some Imperial scholars contend that when the last remaining Tiger Claws survivors were taken into the Astral Claws' midst, these once-loyal Battle-Brothers grasped a poisonous viper to their hearts, thus causing them to eventually fall from grace.

Though the source of the Astral Claws' own gene-seed -- and thus that of their Tiger Claws successors -- remains suppressed, there is still speculation that its provenance ranged from basic Ultramarines stock to that of the Dark Angels, pointing to the supposedly un-degraded quality of Astral Claws gene-seed as well as certain factors of temperament and style of warfare.

But due to the Edict of Obliteration laid down by the High Lords of Terra and carried out after the conclusion of the Badab War, all signs and evidence of the existence of the Astral Claws and the Tiger Claws has been removed from official Imperial records.

Upon the disappearance of the Tiger Claws' senior surviving officer on Terra, rumours in Inquisitorial circles darkly hinted that the lost Chapter was considered tainted by some, and had been a part of the so-called "Cursed Founding".

Thus, most considered that the Tiger Claws were better left as a dead Chapter and their petition for refounding had been denied. The truth of who the Tiger Claws' genetic forebears truly were will more than likely never be known.

The Tiger Claws' Chapter colours were primarily black, with orange shoulder plates, as well as orange on the lower legs that faded into black on the upper legs. The Tiger Claws were originally depicted in a tiger-striped camouflage pattern.

In the original iteration of the Badab War which appeared in "The Badab War" article by Rick Priestly in the Warhammer 40,000 Compendium, the Tiger Claws was the primary Chapter responsible for that civil war.

In its newest iteration, released in Forge World's Imperial Armour Volumes Nine & Ten - The Badab War, Parts One & Two, the name of the Tyrant of Badab's Chapter has been changed to the name Astral Claws.

In the updated background information the Tiger Claws Chapter has instead become a Successor Chapter of the Astral Claws. 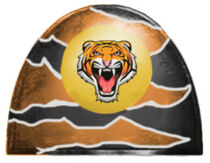 Original Chapter badge of the Tiger Claws.
Add a photo to this gallery
Retrieved from "https://warhammer40k.fandom.com/wiki/Tiger_Claws?oldid=382520"
Community content is available under CC-BY-SA unless otherwise noted.