The Thunderstrike Gauntlet is a massive Power Fist that is used as a melee weapon by the combat walkers of the Questor Imperialis, the Imperial Knights, and by the Renegade Knights of the Questor Traitoris. A super-charged Power Weapon, the Thunderstrike Gauntlet crackles with a barely contained nimbus of energy that by merely clenching the fist can cause shock-waves to emanate outwards and sparks of incandescent fury and sizzling arcs of energy. When used against a foe in close combat, it releases a deafening thunderclap that can crumple protective armour and completely pulverise its target. When the Thunderstrike Gauntlet is swung by the Knight the sheer forces delivered by the blow can send towering monsters or vehicles flying into nearby infantry or other vehicles, crushing them to dust. Knights armed with a Thunderstrike Gauntlet are capable of defeating monstrous xenos in a single strike, and have been known to smash into the legs of enemy Titans, toppling them into broken ruin. 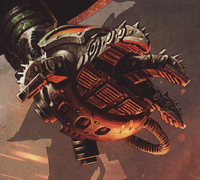 A Thunderstrike Gauntlet, palm view
Add a photo to this gallery
Retrieved from "https://warhammer40k.fandom.com/wiki/Thunderstrike_Gauntlet?oldid=314573"
Community content is available under CC-BY-SA unless otherwise noted.