"I have travelled far and seen much. Yet nothing warms my heart so much as the sight of a gun so massive that its fury makes the very world tremble."

The Thunderfire Cannon is a colossal, quad-barrelled artillery gun designed to excel in a static point defence role for the Adeptus Astartes. Each is capable of firing and reloading at a punishing rate, unleashing salvo after salvo of high explosive shells, pounding the enemy into oblivion. Only the brave or the foolish dare advance forwards in the face of such overwhelming firepower.

Space Marines task forces strike hard and fast, and a unit that cannot maintain a rapid advance swiftly becomes a liability. For this reason, most of their support weapons are mounted on vehicle chassis that can keep pace with the rest of the force, as can be seen with the Vindicator and Whirlwind, but the Thunderfire Cannons are the one exception to the rule.

Mounted on rugged track units, Thunderfire Cannons can traverse almost any terrain to reach the optimum firing position. Though they can move under their own power, they are normally deployed from Thunderhawk gunships or by Drop Pod, brought in when Space Marine forces need to crack a foe's strongpoint position or halt a sudden enemy breakthrough in its tracks.

Those enemies that get too close will soon be engulfed in a wave of explosions that never seems to cease. Each Thunderfire Cannon is tended to by a single Techmarine Gunner who uses his bulky Servo-harness to reload the artillery piece whilst calculating optimal firing trajectories.

The Techmarine manning a Thunderfire Cannon can set its shells to detonate in a variety of different ways, depending on the tactical situation.

Surface detonations are employed against numerous enemies in comparatively clear terrain, airburst shells are used to scour a foe from cover, and the Techmarine can even program the shells to burrow deep into the ground before detonating; though the force of the blast from such Tremor Shells is greatly reduced, the resulting shockwave is sufficient to leave the foe sprawling, making them easy prey for his brother Space Marines.

A standard Thunderfire Cannon is armed and equipped with:

A Thunderfire Cannon's Techmarine gunner is armed and equipped with:

The full technical specifications of the Thunderfire Cannon have not yet been made public by the Adeptus Mechanicus.

The Thunderfire Cannon is similar in appearance to the Astartes Quad Launcher found on the Achilles-Alpha Pattern Land Raider and the Rapier Carrier that were once used by the Space Marine Legions during the Great Crusade and Horus Heresy. 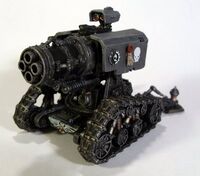 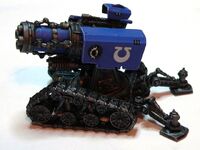 A Thunderfire Cannon and its Techmarine operator

A Thunderfire Cannon of the Ultramarines Chapter
Community content is available under CC-BY-SA unless otherwise noted.
Advertisement