The Thunderbolt heavy fighter is one of the two main fighter aircraft patterns used by the Imperial Navy, the other of which is the Lightning air superiority fighter. The Thunderbolt is the mainstay weapon system of Imperial Navy fighter wings and is a rugged, well-armed and armoured heavy fighter with all-around capabilities, a good maximum speed and above-average maneuverability, powerful nose-mounted weapons and hard points located on the wings for missile or bomb load-outs. It is an aircraft that is well-liked by those who fly and service it and it has served the cause of the Emperor for many centuries.

The Thunderbolt's primary combat role is as an air superiority fighter. It seeks out and engages enemy aircraft in dogfights or hunts enemy bombers to establish air superiority. The Thunderbolt's greatest strength is its versatility, since it has good performance as a high-altitude escort fighter while it is also serviceable in the roles of a low-altitude fighter-bomber, night fighter or even as a reconnaissance aircraft when necessary.

Whilst the Lightning air superiority fighter is faster than the Thunderbolt, with a better climb and dive rate, it is also a great deal less well-armoured, less versatile in the same range of situations as the Thunderbolt and far more finicky, demanding a great deal of attention from its maintenance crews. Like the Lightning, the Thunderbolt is equipped with a Promethium-fueled rocket engine, maneuvering thrusters and an ablative ventral surface that provides it with a limited trans-atmospheric operations capability. However, this capability was provided only for transportation and deployment from an Imperial Navy starship into a planetary atmosphere and was not intended for space combat, which means the Thunderbolt is not a true starfighter, a role normally filled by the Fury space superiority fighter. The rocket engine and thrusters allows a Thunderbolt to deploy from an Imperial Navy starship in low planetary orbit into an atmosphere and can then be used at the end of combat operations to allow a Thunderbolt to return to its mothership after using its twin air-guzzling turbofan engines to reach its maximum operational altitude. Because of this operational capacity in a vacuum, all Thunderbolt pilots are required to wear full, vacuum-sealed flight suits and helmets. The fighter's rocket engine is also used to allow the Thunderbolt to make extremely rapid launch rail take-offs from its mothership or a ground base. Once airborne using the rocket, the Thunderbolt engages its turbofans.

Imperial Navy fighter wings can possess a wide variability in the number of aircraft or starfighters they contain. They normally consist of between 10-20 aircraft or starfighters although some are much larger. Each Imperial fighter wing, in addition to its numeric designator, also takes a name that is usually that of a real or mythological flying creature. There are thousands of fighter wings in service on the Imperial Navy's myriad starships, space stations and ground bases in use by the various Sector and Segmentum Battlefleets all across the galaxy.

The Thunderbolt's main armament is carried in its blunt nose with the gun barrels protruding, and consists of 4 fire-linked Autocannons, 2 on each side, and 2 twin-linked Lascannons on its forward dorsal area. Compared with the Lightning's single Autocannon and two Lascannons, the Thunderbolt is obviously capable of a much higher total rate-of-fire and a much greater volume-of-fire, resulting in the Thunderbolt being capable of inflicting substantially more damage than its smaller and lighter counterpart. The Lascannons are primarily used in the fighter's ground attack role to punch through the heavy armour of enemy vehicles, whilst the Autocannons are the kinetic weapons of choice for strafing enemy infantry formations and dog-fighting.

The heavy fighter can also carry 4 bombs, 4 air-to-surface Hellfire Missiles or 4 air-to-air missiles on its external wing-mounted hardpoints, without sacrificing the use of any of its main weapons, whereas the lighter Lightning fighter must sacrifice a weapon to carry external hardpoints, usually its single Autocannon. A Thunderbolt already has an unusually long operational range for a heavy fighter, but when the situation or mission parameters call for it, a Thunderbolt can be outfitted with external Promethium fuel drop tanks for increased range.

{C}The Thunderbolt has a heavy, rectangular fuselage rather than a more streamlined tubular body, which is flanked by a thrust tunnel containing a large, turbofan jet engine on either side of the aircraft. The wings are mounted on the thrust tunnels and very slightly forward-swept. The angular cockpit is set about halfway down the fighter, with the remaining back half dominated by the tail section, complete with two tail-planes and a single tail-fin. The whole of the Thunderbolt is armoured with 45 mm of ceramite armour plate. Being a larger and heavier airframe than the Lightning, the Thunderbolt is slower and less maneuverable. However, it is considerably more durable, capable of taking damage that would destroy a Lightning outright. The Thunderbolt also has greater range, thanks to its more powerful engines and larger fuel tanks.

{C}Thunderbolts are most commonly used in an air superiority role, where they intercept enemy aircraft and engage in dogfights with them. Thunderbolts are especially effective against enemy bombers as the Thunderbolt's large weapons array can punch through bombers' usually heavy armour, and Thunderbolt armour can withstand -- to a degree -- the withering fire of bombers' multiple turret guns better than its counterpart Lightning or Fury fighters. Because of its versatility, the Thunderbolt is also deployed as close air support for Imperial Guard or even Space Marine units. The Thunderbolt can attack enemy armour or infantry on the ground using Hellstrike Missiles, its Lascannons for penetrating the armour of enemy vehicles and its Autocannons for strafing enemy infantry positions.

Thunderbolt of the 717th Imperial Navy Fighter Wing, deployed during the Siege of Vraks 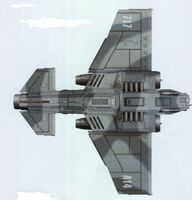 Dorsal View of a Thunderbolt of the 717th Imperial Navy Fighter Wing , 14th Aircraft of its squadron, deployed during the Siege of Vraks

Imperial Thunderbolt Fighter, Rear View
Add a photo to this gallery
Retrieved from "https://warhammer40k.fandom.com/wiki/Thunderbolt?oldid=95192"
Community content is available under CC-BY-SA unless otherwise noted.