The shifting void of the Hyrakii Deeps of the Segmentum Pacificus hid the coreworlds of the Thokt Dynasty and their legions. The Thokt Crypteks have fashioned rad-receptors into the weaponry of their soldiers, harnessed from the potent radiation of the sparkling blue energy that permeates the rifts in the sky overhead, above the crystalline continent-tombs of the Thokt. A symptom of this choice is that this barely contained energy causes a shimmering azure light to emanate from the eyes of Thokt Necron Warriors', from their Gauss Flayers and even the cracks in their mechanical forms. When the Thokt gather for war, the barely contained power of the Hyrakii void rifts is ready to be unleashed upon their foes.

Most recently, in 994.M41 the dynasty's fringe worlds were invaded by the Ork of WAAAGH! Bludtoof. Entire worlds were turned into killing fields in order to grind down the Orks in a bloody war of attrition.

The azure light of the Hyrakii Deeps surrounds the Thokt Dynasty's legions, pulsing in their weapons and illuminating the dull metal of their warriors' forms.

The Thokt favour the cold blue of their Crownworld's immense void reefs. The incomplete circles of the Thokt dynastic symbol show the alignment of the Hyrakii Deeps to the Crown and coreworlds of the dynasty's ancestral star systems. 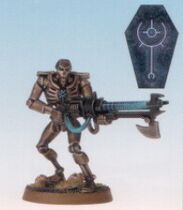 Thokt Dynasty glyph and Necron Warrior
Add a photo to this gallery
Retrieved from "https://warhammer40k.fandom.com/wiki/Thokt_Dynasty?oldid=294085"
Community content is available under CC-BY-SA unless otherwise noted.