The Blades of Magnus

The Blades of Magnus are a thrallband of the Thousand Sons Traitor Legion.

Following the destruction of their homeworld of Prospero at the hands of the Space Wolves and their subsequent flight to their refuge on the Planet of the Sorcerers, the Blades of Magnus were long bound to the Thousand Sons' Cult of Manipulation, and began to work in secret to break the bonds between their Primarch Magnus the Red and the Chaos God Tzeentch.

Though they toiled in secret for many Terran years, their hidden machinations were eventually discovered by the Daemon Primarch, who punished the Blades of Magnus most severely.

Blasting them with eldritch power, Magnus reduced the Legionaries and Sorcerers of this thrallband to soulless, undead automatons -- mere vessels for the Crimson King to control -- like puppets by a mad marionette.

Following the flight of the few surviving Thousand Sons to the Planet of the Sorcerers at the conclusion of the Burning of Prospero during the Horus Heresy, the Blades of Magnus were the first of Prospero's Sorcerers to devote themselves wholly to their Primarch's salvation.

They worked in secret to break the bond between the Crimson King and the eldritch forces he had embraced. The Blades adopted the colours of Magnus' personal guard, the Rehati, but wore them in reverse -- in this way they demonstrated their intent to save Magnus from himself.

For long years they toiled in secret, slaying those daemons with which Magnus had made his devil's bargains. When the Daemon Primarch learned of their works, he did not reward them, but blasted them with annihilating mental power. Now every one of them is soulless, each but a vessel for Magnus' will.

The Rubricae of this thrallband known as the Ones Who Stood Resolute were formerly the loyal guards of Magnus' tower upon Prospero.

Their stoicism in life has been replaced by the predictability of the automaton -- those who approach Magnus with intent to harm will find squad after squad of these undying killers converging fire upon them.

The Blades of Magnus thrallband's colours are the adopted colours of the Rehati, golden battle-plate trimmed in dark blue and azure.

The Blades of Magnus thrallband's badge is a kohl-coloured sigil of the Cult of Manipulation centred upon a field of gold and trimmed in dark blue and azure.

Though they did not know it at the time, the kohl markings that the Blades of Magnus applied around their left eyes when the Legion was loyal to the Imperium would bear a striking resemblance to their future symbol.

Examples of the various iconography utilised on the pauldrons of the Blades of Magnus.

A Blades of Magnus Exalted Sorcerer, The One Who Was Nytep, is inhabited by a portion of Magnus' mind that seeks enlightenment from death.

A Blades of Magnus Exalted Sorcerer, The One Who Was Daor Haak, is a vessel for the part of Magnus that seeks wisdom from the heavens. 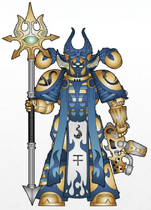 A Blades of Magnus Chaos Sorcerer; note, the flames that adorn The One Who Was Laorath echo the pyromaniacal part of Magnus that lies within.

The Rubricae, The One Who Was Tarutap, is part of a composite mind, his squad animated by the fires of bitterness.

The Rubricae, The One Who Was Thorsis, is said to never miss, for he bears the all-seeing eye of Magnus. 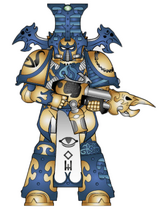 A Rubricae of the Blades of Magnus. 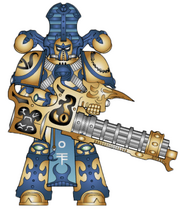 A Rubricae of the Blades of Magnus bearing a Soulreaper Cannon; a Mark of Tzeentch adorns the weapon's main housing.

Another example of a Blades of Magnus Sekhmet Scarab Occult Terminator.

The Beastmen that serve the Blades of Magnus thrallband are a cult of violence-loving albino Tzaangors that have taken to following this thrallband.

A Blades of Magnus Chaos Rhino armoured personnel carrier bearing the mystical symbols and iconography typical of the Thousand Sons Traitor Legion.
Add a photo to this gallery
Retrieved from "https://warhammer40k.fandom.com/wiki/The_Blades_of_Magnus?oldid=354687"
Community content is available under CC-BY-SA unless otherwise noted.