The Thanatar-class Siege Automata is a heavy class of Imperial robot utilised by the Legio Cybernetica during the Great Crusade and Horus Heresy eras of the late-30th and early 31st Millennia. Designed as a mobile artillery platform rather than a general battle unit, it is armed with a Hellex Pattern Plasma Mortar. This is a terrifying weapon able to launch dense spheres of blazing plasma on arcing trajectories over defensive barriers and into the heart of enemy fortifications, incinerating anything in their blast radius with a liquid tide of sun-hot fire.

The Thanatar's frame, built to accommodate the huge weapon and the power systems and fuel reserves required to supply it, is considerably larger than even the hulking Castellax-class Battle-Automata. Its frame is also heavily reinforced, both to withstand the stresses of firing its principal weapon and to protect it from incoming attacks. This factor, alongside the use of an Atomantic Shield array, make Thanatars notoriously durable. Such is their resilience that Thanatars are beyond the ability of most small arms, no matter how advanced, to harm. It is not known if this particular class of heavy-siege automata is still utilised by the mysterious Legio Cybernetica in the late 41st Millennium.

Unlike many of the Battle-Automata produced to enhance the Mechanicum's military power during the Great Crusade, the origins and lineage of the Thanatar Pattern remain uncertain, save perhaps for the fact that its armament was known to be the product of the Forge World of Ryza. Ryza remained the only locale where the Hellax Pattern weaponry utilised by the Thanatar was produced during the time of the Great Crusade. 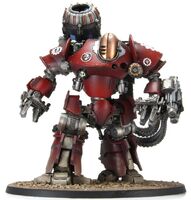 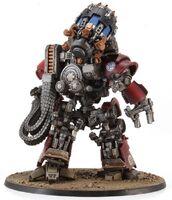 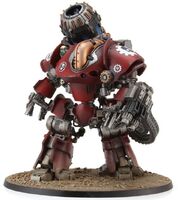