The Thallax, Thallax Cohort or Thallaxii were heavily augmented cyborg shock-troops utilised by the Ordo Reductor faction of the ancient Mechanicum during the Great Crusade and Horus Heresy eras in the late 30th and early 31st Millennia.

The Thallaxii differed from the standard Skitarii regiments both in their purpose and the unique extent of their augmetics. The Thallaxi centuries utilised a divergent form of power armour technology known as the Lorica Thallax, which, unlike the armour used by its Space Marine counterparts, was permanently, surgically bonded to the body of the wearer.

Created exclusively by the Ordo Reductor, Thallax were often "gifted" by their archmagi to other factions, such as the Legio Cybernetica, in return for fealty and aid.

So it was that the dread Thallax were found within the ranks of the Legio Cybernetica 's cohorts. It is not known if the Ordo Reductor still possesses the archaic technology used to create Thallaxii troops in the present era of the late 41st Millennium.

The Thallax were specialised, cybernetically-augmented shock troops manufactured and principally used by the Ordo Reductor factions of the ancient Mechanicum.

Designed to operate in the most lethal and hazardous theatres of war, the design of the Thallax is arguably a bridging point between the most commonplace heavy combat servitors and the augmented Human Skitarii of the Forge Legions.

The Thallax differed from the Skitarii regiments both in their purpose and the unique degree to which their bodies had been reshaped by augmetics.

The particular augmentations undergone by one of the Thallax are both severe and extreme, retaining only the brain (and in many cases the skull and spinal column), the life-sustaining viscera and nervous system as the basis of the articulated and armoured robotic frame which encompasses it.

For some within the Mechanicum this transformation of the Human mind skirted the edge of abomination such as that posed by sentient "Abominable Intelligence" (artificial general intelligence).

Given the resources required, the difficulty of creating a Thallax and the fact that an individual's will to live was a factor in whether a usable measure of sanity was retained in the subject, Thallax conversion was often reserved for suitable Forge Guard (forge city security forces) and Skitarii fallen in battle and subjects obtained from more mysterious sources by the unfathomable and baleful Ordo Reductor.

Other principal features of the design included a high-energy compact reactor system (whose emanations could not be endured by a less augmented organic system), allowing for extremely potent portable weaponry to be utilised and arcane implanted sensory apparatus operating outside the usual realm of organic perception.

The unfortunate side-effects of these systems on the living components, however, were continuous agony and psychotic breakdown; effects ameliorated by the surgical excision of some of the brain's emotional centres.

The resulting machine-creature is capable of far greater tactical flexibility and independent action than a mere combat servitor, although terminal deterioration of the subject's psyche was certain over extended periods of time.

The armoured chassis and life support systems of the Lorica Thallax shared many technological underpinnings and common components with early patterns of Legiones Astartes power armour, and were both extremely adaptable and highly durable.

This provided great strength and durability for the Thallax on the battlefield and allowed for a beneficial degree of cross-supply between the Space Marine Legions and the Ordo Reductor during the Great Crusade.

The Lorica Thallax was developed from the same power armour technology which led to the development of Legiones Astartes battle-plate, but taken down along an entirely different avenue of development.

Heraldic Devices of the Ordo Reductor

To outsiders a great deal of the nuance, symbolism and application of these signifiers is lost, shrouded by the arcane doctrines and circles of the Cult of the Omnissiah's worship, but the broadcast and most general interpretations are widely understood.

In many such sects of the Mechanicum, the deep crimson livery most associated with the Machine Cult is in fact reserved most often for its sworn and initiated priesthood: the magi, ordained Enginseers, logisters, autosavants and so on, and by lessening degree their initiates and close retainers.

The bulk of the Mechanicum's soldiery, however, as well as their laymen servants, are usually clad in darker hue, often of a livery associated with their Forge World or particular order, but marked always with the heraldic device of their masters.

Such is the common case with the Thallax. Where in service with the Ordo Reductor directly, it is common for the Thallax's armour and limbs to be over-plated with either burnished steel, polished bronze or, more rarely, gold or some environmentally protective coating.

This is further adorned with colouration and iconography marked upon one or both pauldrons and/or more rarely the breastplate featuring the heraldry of their order of service, cohort designation, Forge Stamp and issue.

During the Great Crusade and early Horus Heresy era, where the Ordo Reductor unit had been embedded for a time of service with a particular Space Marine Legion, Rogue Trader Militant, Titan Legion or Imperial Army battlegroup, it was often customary to adopt in part the heraldry of that larger formation, and often for the Broken Tower emblem of the Ordo Reductor to be heraldically parted with the symbol of the principal affiliation, as shown with the following examples: 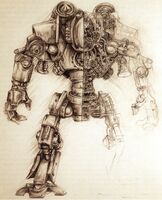 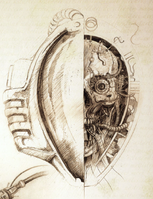 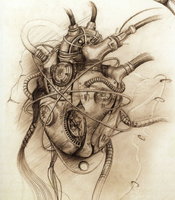 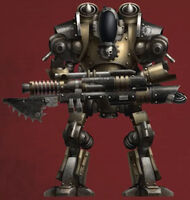 The Thallax designated Omicron-765; Lorica Thallax Lacrymal-XVII Pattern Encapsulation; this Thallax was part of a cohort deployment with Clan Avernii of the Iron Hands Legion during the Drop Site Massacre. 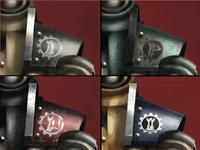 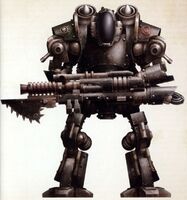 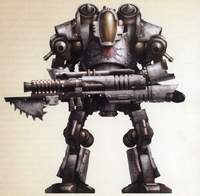 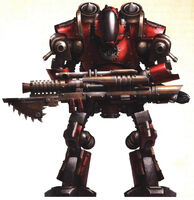 Sarum Mechanicum Thallax Aleph-Nun-833, assigned to Bodt under binding compact pledged between the World Eaters and the so-called Crimson Brotherhood of the Forge World of Sarum.
Español
Community content is available under CC-BY-SA unless otherwise noted.
Advertisement