A Tesseract Ark is an arcane Necron war machine first encountered by the Imperium of Man during the Orphean War of the late 41st Millennium. Imperial observation of this war machine classifies it as a mobile ordnance carrier/siege unit of potent firepower capacity, and Auspex and Cogitator analysis reveals the likelihood that the vehicle contains a force containment vessel whose operation is considered physically impossible by the writ of the Imperium and the Adeptus Mechanicus.

From this "Tesseract Singularity Chamber" the Tesseract Ark can siphon and unleash storm-winds of particle energy, the stolen fire of suns, and shatter the earth and crumble bastions alike with seismic tremors. A Tesseract Ark also exhibits extreme durability with maximal resistance to projectile and energy weapons fire. This protection is attributed to non-Euclidean function Necron material technology in combination with terradyne-magnitude controlled gravity distortions emanating from the vehicle; and unbeknownst to the Imperium, this effect is also purposefully induced from the contained singularity to better protect the Ark from harm. Imperial tacticians have learned that when encountered, a Tesseract Ark is best engaged at long-range with saturation ordnance/airstrikes or at medium range with super-heavy battlefield assets. If forced into close-range engagements, the fatality level of assaulting Imperial troops is likely to be extreme and victory is not guaranteed regardless of the attacker’s strategic advantage.

Several Tesseract Arks were used by the nobility of the Necron Maynarkh Dynasty during the battles that consumed the sector capital world of Amarah in the Orpheus Sector of Segmentum Tempestus. The Tesseract Ark is one of the rarer Necron war machines encountered by Mankind, for its manufacture is the purview of only the most adept of the Necron Crypteks. It is also one of the most powerful, containing at its heart a contained singularity torn from the core of a dying star. The Tesseract Ark can manipulate this singularity for a variety of battlefield effects, often with deadly consequences for the enemy. A Tesseract Ark’s open and skeletal form is held aloft by a sophisticated anti-gravitic engine, which allows it to hover over any intervening terrain that might otherwise hamper its movement. Its powerful reaction thrusters drive it at a speed that belies its bulk, whilst the sensor-node mounted above the crewman’s seat allows it to better find its cowering foes.

All Tesseract Arks are armed and equipped as follows:

The secondary weapon systems of the Tesseract Ark can include one of the following:

The analysts of the Inquisition's Ordo Xenos have not yet determined the technical specifications of the recently encountered Tesseract Ark. 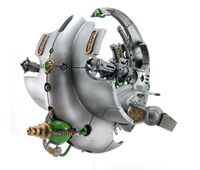 Forward view of a Tesseract Ark 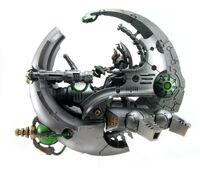 Left side view of a Tesseract Ark 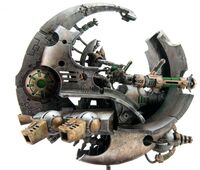 Right side view of a Tesseract Ark
Add a photo to this gallery
Retrieved from "https://warhammer40k.fandom.com/wiki/Tesseract_Ark?oldid=288109"
Community content is available under CC-BY-SA unless otherwise noted.