A Tesla Carbine is a form of Necron Tesla Weapon that unleashes a bolt of living viridian lightning that crackles from foe to foe after hitting its target, charring flesh and melting armour. Tesla bolts feed off the energy released by the destruction, and the lightning discharge becomes more furious with every fresh arc, moving as if it had a mind of its own. In some cases, these energetic projectiles have even been observed to crack ceramite and plasteel.

These weapons have been named by the Imperium after the ancient Terran scientist Nikola Tesla, who was the first human known to experiment with this type of weapon technology, although the Necrons had perfected it long before humans even existed. A Tesla Carbine is the smallest form of Tesla Weapon, and its rifle size makes it easily portable. It is most commonly used by the Necron Immortals as an alternative to their standard Gauss Blaster, although Tomb Blades are also commonly fitted with twin-linked Tesla Carbines as their primary armament. 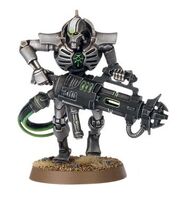 A Necron Immortal armed with a Tesla Carbine 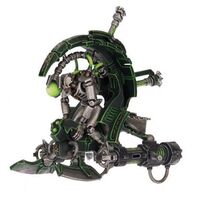 A Tomb Blade armed with twin-linked Tesla Carbines
Add a photo to this gallery
Retrieved from "https://warhammer40k.fandom.com/wiki/Tesla_Carbine?oldid=333475"
Community content is available under CC-BY-SA unless otherwise noted.