"As I looked into its dead black eyes, I saw the terrible sentience it had in place of a soul. And looking back from the deepest recesses of the alien’s mind, I perceived what I can describe only as an immortal hunger."

A Termagant serves as the standard infantry unit of any Tyranid swarm. Speed, agility and survival are the main characteristics of the Termagant bioform (Gauntii virago). These small xenos warriors most commonly carry the dreaded Fleshborer Biomorph, but have been known to carry other more potent weapon Biomorphs into battle. While not very effective in combat as a small group, they are most powerful when swarming in large broods across a target planet once the Great Devourer's invasion reaches its high tide. The desperate need to survive makes them a menace even if their synaptic control with the Tyranid Hive Mind is broken, as they run to cover and will lurk waiting to kill whatever threatens their hiding spot.

A Termagant of Hive Fleet Leviathan 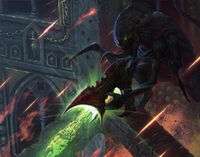 A Termagant firing its Fleshborer at the enemy
Add a photo to this gallery
Retrieved from "https://warhammer40k.fandom.com/wiki/Termagant?oldid=359576"
Community content is available under CC-BY-SA unless otherwise noted.