"I have served alongside the Legiones Astartes before, but these Imperial Fists are a breed apart. They seek no praise and all the honours and badges of glory more then not at all -- but when the dark presses close and the claws of the unknown reach for the throat of our armies, there are no other warriors I would choose to stand beside me, for they fight like the titans of legend!"

The Templar Brethren, or Templars, were the elite of the VIIth Legion, the Imperial Fists, during the Great Crusade and Horus Heresy eras of the 30th and 31st Millennia. They were the Guardians of the Temple of Oaths aboard the great fortress-ship Phalanx, and the Legion's most highly accomplished warriors. Warriors of unequalled zeal, the Templar Brethren's relentless determination and matchless skill were the hallmarks of this deadly company, whose punishing recruitment protocol ensured that only the finest Imperial Fists bore their proud heraldry.

Though their duty bound them to the Temple of Oaths, these dauntless warriors were found wherever the Imperial Fists carried the Emperor's Great Crusade to unify Mankind. They bore the best wargear that the armouries of the VIIth Legion could provide: ancient Archeotech, the newest creations of the Mechanicum and more common marks of weapons forged with exacting precision. With their superior skill in battle and the finest weapons at their disposal, they were at the spearhead of the Emperor's Great Crusade to unify Mankind.

Excelling in close combat, the Templar Brethren wielded Power Swords in battle, whilst their Combat Shields provided much-needed protection as they fought on the frontline in addition to their ornate Artificer Armour. Few enemies of Mankind seldom survived the first shattering charge of the Templar Brethren and had little chance of overcoming their defences. At the leading edge of battle, these warriors inspired their brothers with their unyielding courage and the blood-red path they carved through the foes of Mankind.

Within the Imperial Fists Legion of old, there were many formations from squad to Household whose names and deeds shone bright in the days of the Great Crusade. When mentioning such elite formations one cannot pass over the Templars. Raised by Rogal Dorn during the first solar decade of his command, the Templars were the warriors charged with guarding the Temple of Oaths aboard their mighty flagship, the Phalanx. No fane of superstition or misguided religion, this secular Temple was dedicated to the ideals of the Great Crusade and the sacrifices it demanded.

There, beneath the tattered and burned banners of defeated enemies and the statues of dead heroes, the Imperial Fists returned to renew their perpetual oaths of loyalty to their Emperor and Primarch. Each oath made by a son of Dorn was carved on the walls, floor and ceiling, etched for all eternity in black granite. Besides Dorn and the Emperor, only the Templars were permitted to enter the Temple unbidden.

Nominally the 1st Company of the Imperial Fists Legion, the Templars' strength rarely fell below 1,000 warriors, and their members were drawn from Veterans across the Legion. Skill at arms was not enough to earn such a responsibility, for each Templar was a warrior in whom the Crusader light had come to burn with undimmed brightness. Zealous, remorseless and tempered by many solar decades of war, they were exemplars of what it was to be Imperial Fists of the Great Crusade.

Besides the Primarch, only one other position commanded unconditional authority over the Legion as a whole. The First Captain of the Imperial Fists was also always the commander of the Templars, and by tradition the finest proven warrior within the VIIth Legion. As guardian of the oaths of every Imperial Fists warrior, the First Captain held not only great authority, but commanded respect from all of his brothers. 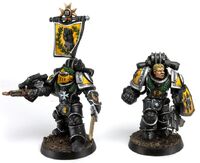 A Chapter Champion and fellow Templar, stand ready to face the foes of Mankind

A trio of Templar Brethren, arrayed in the finest wargear available
Add a photo to this gallery
Retrieved from "https://warhammer40k.fandom.com/wiki/Templar_Brethren?oldid=344243"
Community content is available under CC-BY-SA unless otherwise noted.