Telennar is a minor craftworld of the Asuryani. The cordial relations between Alaitoc and Telennar have often brought the two craftworlds together to battle against the forces of Chaos, most recently during the Fall of Medusa V in 999.M41.

The Telennar are also known for going to war alongside the Harlequins of the Masque of the Twisted Path.

It is well documented that the Twisted Path have an affinity with the Asuryani of Telennar, for while the masque has been known to spirit victims, whether they be friend or foe, away into the Webway (never to be seen again), this never happens on Telennar -- some say it is because the souls on that craftworld are too dark.

Telennar's colours are bright orange and sable. The meaning of their world-rune is unknown in the Aeldari Lexicon. 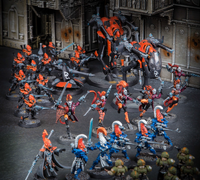 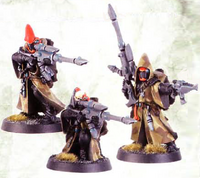 Telennar Rangers during the Fall of Medusa V. Note the camouflage livery. 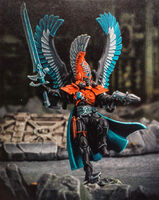 Telennar Autarch Korhedron, the Sun-born Prince. To mark him out as the army commander, Korhedron wears a bright turquoise cape, the spot colour for the army. 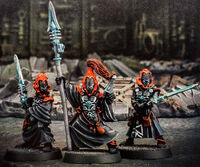 The Dark Reapers known as the Avenging Requiem. Intent on revenge against the Orks, these Aspect Warriors fight at the forefront of Telennar's campaigns.
Add a photo to this gallery
Retrieved from "https://warhammer40k.fandom.com/wiki/Telennar?oldid=367326"
Community content is available under CC-BY-SA unless otherwise noted.