The Telemon Heavy Dreadnought was a rare Dreadnought variant utilised exclusively by the Legio Custodes during the Great Crusade and Horus Heresy eras.

Fewer than a handful of Telemon Dreadnoughts were to be found within the ranks of the Legio Custodes, each intended to stand sentinel over its charges no matter the force brought against it.

In part this rarity was due to the cost in labour and resources for the creation of such a superlative engine of war, for each bore at least one plate worked by the Emperor's own hand, and also the rarity of appropriate Custodian candidates to control them.

The honour of interment in one of the few existing Telemon sarcophagi was awarded only to the most celebrated warriors within the sodalities of the Legio Custodes, and until a worthy candidate found his end in battle, the Dreadnoughts stood silent and empty.

Despite this, the sheer power of an unleashed Telemon-class Dreadnought far outweighed the trials of its construction, for few could stand against the array of esoteric, hand-crafted weapons that graced its chassis or the ferocious will and warrior skill of the master Custodian interred within.

It is unknown if the Telemon Heavy Dreadnought is still in use by the Adeptus Custodes of the 41st Millennium.

A Telemon Heavy Dreadnought may exchange either or both of its Telemon Caestus for one of the following: 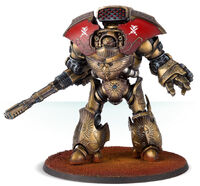 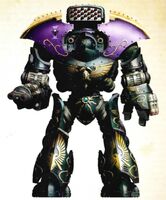 Debeeran Kalimakon, a Custodian who fought during the Signus Campaign and was mortally wounded by the assault of a daemonic Harpy's molecular dissolution venom. Though even as his flesh slowly sloughed from his frame within his armour, he battled on for 18 more solar hours, going on to courageously pilot an Equinox Interceptor to fly alongside Sanguinius in the final assault of the battle for Signus Prime. Kalimakon was granted the solemn duty of life eternal and interred within a venerated Telemon Dreadnought, and he had a role yet to play in both the Solar War and the Siege of Terra.
Community content is available under CC-BY-SA unless otherwise noted.
Advertisement