The Taurox Prime is a variant of the standard Astra Militarum Taurox armoured personnel carrier (APC). The Taurox Prime is a specialist variant of this APC that was built for use by the elite Militarum Tempestus, using the efficient and flexible Taurox design. The vehicle's chassis incorporates arcane technologies that allow it to sustain Tempestus Scions while they operate in extremely hostile environments up to and including the cold vacuum of space. The vehicle can be internally pressurised, and features an array of life-support systems. Furthermore, Taurox Prime's engines -- using the proper rituals and prayers -- are capable of channeling magnetic force into the APC's tracks, enabling the vehicle to cling to vertical surfaces, and even operate in zero gravity conditions.

Unlike the standard Taurox, the Taurox Prime is capable of being outfitted with a wide variety of weapons systems, and is designed to be highly versatile. These vehicles are the ideal transport for the elite forces of the Militarum Tempestus, and are armed with the lightweight Taurox Battle Cannon mounted upon a turret atop the vehicle and a set of twin-linked Hot-Shot Volley Guns mounted on the sides of the vehicle's hull. The Taurox Battle Cannon can be replaced with a Taurox Gatling Cannon and the hull-mounted weapons replaced with twin-linked Autocannons. The Taurox Prime can have its turret removed and a Taurox Missile Launcher system equipped or just have its turret and weapon removed to lessen the vehicle's weight. The vehicle can also be equipped with a pintle-mounted Storm Bolter or Heavy Stubber, either on top or mounted on its turret. The Taurox Prime can also make use of bull bars on the front to protect from debris and can be equipped with many other Imperial upgrades and attachments such as a searchlight, relic plating, a Dozer Blade, a recovery gear, Smoke Launchers, Extra Armour Plating, fire barrels, a Hunter-Killer Missile Launcher, Camouflage Netting, and an Augur array.

The regiments of the Militarum Tempestus depend upon their Taurox Primes to deliver the mighty fury of the Imperium across all types of dangerous terrain and impossible conditions. Given the Taurox Prime's long-standing service with the Tempestus Scions, many of these vehicles have become notable for their supporting role during legendary Imperial victories. The following represent several of the most notable Taurox Primes:

A Taurox Prime armed with a hull-mounted Taurox Missile Launcher 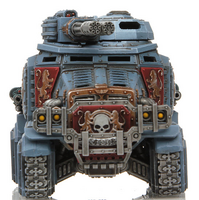 A Taurox Prime as seen from the front 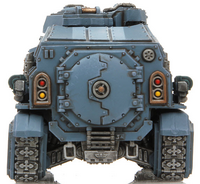 A Taurox Prime as seen from the rear

A Taurox Prime as seen from the side

The Iron Talon, a Taurox Prime of the 55th Kappic Eagles

The Noble Blade, a Taurox Prime of the 32nd Thetoid Eagles

The Huntsman, a Taurox Prime of the 9th Iotan Gorgonnes
Add a photo to this gallery
Retrieved from "https://warhammer40k.fandom.com/wiki/Taurox_Prime?oldid=304188"
Community content is available under CC-BY-SA unless otherwise noted.