A Tankbusta (pl. Tankbustaz) is an Ork Boy who has become completely addicted to the thrill of destroying the armoured fighting vehicles of his foes. The Tankbustaz's desire to hunt down and slay the biggest, most dangerous tanks they can find echoes the primal instinct of the big game hunter.

Indeed, as primitive hunters might claim a gruesome trophy from a fallen beast to better brag of its demise, so Tankbustaz will strip the choicest loot from the wreckage of a ruined tank.

Colourful hull plates are hammered into crude armour, internal gubbins worn proudly as warrior jewellery, and the flayed skins of crewmen are draped round the Tankbustaz' shoulders like pelts.

They equip themselves extensively for dealing death to enemy armour –- their whistling volleys of Rokkits, and lethal Tankbusta Bomb assaults can spell annihilation for even the heaviest enemy tanks.

Orks tend to fixate upon whatever type of combat they enjoy most, gathering together with others of a like mind and forming a specialist mob. The Tankbustaz are a classic example of one of these Greenskin subcultures. They are Ork Boyz who have experienced the undeniable thrill of scoring a direct hit upon an enemy tank and seeing the vehicle explode in flames. If Orks were given to musing upon such things, they might equate the thrill felt by a successful Tankbusta with the elation felt by a Feral Ork who has managed to kill a rampaging Squiggoth or Megadon.

An Ork finds something glorious in being able to boast about killing something twenty times his size. The victorious warrior becomes the focus of grudging admiration and envy from his fellows, a feeling to which a young Ork can easily become addicted.

Just as a Feral Ork may take the talons, horns or skull from a great beast he has killed, a Tankbusta will invariably take a trophy from a vehicle he has destroyed and display it about his person. It is common for a Tankbusta to wear armour plates fashioned form pieces of a tank he has destroyed, sport armoured vehicle nuts and cogs as crude jewelry, or to hammer rivets or bolts into his flesh as kill markings.

The Rokkit Launcha is not the only weapon favoured by these anti-tank specialists. Many Tankbustaz get sick of missing their targets and use personalised methods of delivering their Rokkits to the enemy. These range form Tankhammers to trained Squigs that carry explosive payloads. For close encounters, Tankbustaz also carry heavy magnetic discs they call Tankbusta Bombz.

These are attached to enemy vehicles with a great clang that heralds the detonation of the explosive charge inside. A whole unit using their Tankbusta Bombz on the same vehicle is almost certain to destroy it in a spectacular fashion. This usually takes several Orks with it as shrapnel scythes through the air, but as the Tankbustaz say, "They know da risks when they took da job."

Not all of these proclaimed "big game huntas" have claimed their first tank kill. Aspirants tend to hang around more experienced Tankbustaz, waiting for their own moment of glory. A Tankbusta who has succeeded in scoring his first confirmed kill of an enemy vehicle enjoys being "tanked up" after the battle, a ritual that involves devouring the wrecked tank's crew and drinking engine oil from the vehicle's smoking remains. 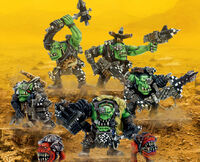 A Mob of Tankbustaz searching for their foes on the battlefield

A pair of Ork Tankbustaz
Add a photo to this gallery
Retrieved from "https://warhammer40k.fandom.com/wiki/Tankbusta?oldid=349520"
Community content is available under CC-BY-SA unless otherwise noted.