A Tallyman is a Chaos Space Marine specialist found exclusively within the ranks of the Death Guard Traitor Legion. It is their job to keep a tally of woes inflicted by the virulent Plague Marines of their Legion.

They count ammunition expended, diseases inflicted and victories achieved and defeats suffered. Inspired by the Tallyman's count, the followers of the Plague God are filled with the power of their patron lord. Always they tally the unholy number seven in an effort to invoke Nurgle's boon and dark blessings.

The worshippers of the Dark Gods know that there is power in words and numbers, incantations and arcane numerology. Mortarion's obsession with the sacred number seven borders upon the manic, infecting every strata of his Legion. Seven is the unholy number of Nurgle, the integer infectum, the digit of disease. Through fervent repetition, ritual conjunction and symbolic adherence, the Death Guard channel the energies of their sacred numeral to beseech Nurgle's blessings.

The preachers of this sevenfold doctrine are the Tallymen. Part priests, part demagogues, part metaphysical scribes and quartermasters, these festering zealots stride to battle festooned with the trappings of their strange craft. They carry heavy tomes and reams of parchment whose mouldering pages crawl with tallies penned in a crabbed, spidery hand. Nurglings caper about their feet, brandishing more scrolls, more tallies, more counts of the seven. Upon their shoulders the Tallymen bear huge Vox speakers through which their stentorian voices boom, underpinned by the nerve-shredding scritch and scrape of their poisoned quills. Their incantations are endless, a purgatorial drone of counting that rises to a sevenfold crescendo before looping around and beginning yet again.

The Tallymen count woes. They count shells expended, wounds inflicted, foes that flee screaming into the gloom. They count the flies in the air and the number of the slain, victories achieved and defeats suffered. Always they tally the unholy seven, and in so doing they invoke Nurgle's boon. Nurgle's faithful are empowered and inspired by the Tallyman's count. As his voice echoes in their ears, so empyric power seeps into their souls. Wounds heal shut with sucking slurps. Rotted muscles bulge with strength while the rambunctious joy of Grandfather Nurgle fills up curdled souls. Flies swarm thick in buzzing clouds, and diseases blossom all the faster as the eye of Nurgle turns toward the battlefield. The Death Guard rejoice as they feel their Dark God's power squirming like worms through their flesh.

On the battlefield, Tallymen are bellowing terrors, yet at all other times their order is cloistered and secretive. Long ago, Mortarion entrusted them with the numerological codes to unlock the hidden vaults where the Death Guard keep their most appalling viral weapons -- Warp-spawned hell-plagues that can obliterate entire worlds. Such strains are precious and irreplaceable, and not lightly do the Tallymen part with them. The Death Guard Lord who demands access to these horrific instruments of destruction had best be prepared to pay their terrible price. 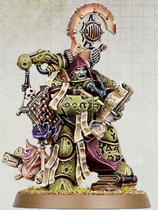 Retrieved from "https://warhammer40k.fandom.com/wiki/Tallyman?oldid=355386"
Community content is available under CC-BY-SA unless otherwise noted.