"Of the Tactical Space Marine, bedrock of his Chapter and paragon to his brothers, I shall tell thee. He shall be steeped in the lore of battle and schooled in all manner of weapon and strategy. With combat blade, boltgun and grenade he shall assail the foe. But these are mere tools: a Tactical Space Marine's true weapons are his courage, his wits and his dedication to his brothers. He will bring his foe to battle in a manner and time of his choosing, never himself caught unready or ill-prepared for the task at hand. In defence he shall be stalwart as the mountain, a bulwark stood firm against the enemies of Man. In attack he shall strike with the wrath of the Immortal Emperor, felling the foe without mercy, remorse or fear."


— The teachings of Roboute Guilliman, the Apocrypha of Skaros

Like their Assault Marine counterparts, the members of a Tactical Squad can be tough as nails. The Chaos Space Marines also use units equivalent to Tactical Marines, though they have less diversity in weapons, are more vicious in melee combat and are usually led by an Aspiring Champion of Chaos.

Since the advent of the Codex Astartes, Tactical Squads have been the backbone of most Space Marine armies. They have been called upon to fulfil the full range of battlefield roles; they hold ground, provide fire support and charge into the close quarters fighting of bloody melees, as the ever-changing theatre of war dictates. As befits their flexible battlefield role, Tactical Squads take a variety of weaponry to the field of battle.

In addition to the standard armaments of Bolt Pistol and grenades, most Tactical Space Marines carry a bolter -- the weapon of vengeance made famous on untold millions of blood-soaked battlefields. This formidable anti-infantry firepower is typically complemented by both a heavy and special issue weapon. The exact armaments are chosen to match the requirements of each deployment, and weaponry duties are rotated between all members of the squad save the sergeant, so all Tactical Space Marines must be trained and capable with every weapon their squad can be called upon to field.

Each Tactical Squad is led by a grizzled sergeant who has thrived through solar decades, or even standard centuries, of hard and brutal campaigning. It is essential that battleline squads be led by a canny and daring individual capable of reading the battle for opportunity, and it is quite common for such sergeants to be seconded from the elite Veteran 1st Company of the Chapter.

This ensures that the mainstay of the Chapter's battle forces are led by the most experienced of its warriors. No matter how detailed a plan, many decisions in the heat of battle -- such as whether to advance at full sprint, fire on the move, take cover, or seize vital strongpoints -- must be made in a rapid fashion. The right snap decision can be the difference between victory and defeat.

The Legion Tactical Squad, the pre-cursor to the Tactical Squad of the 41st Millennium, was a tactical formation of the ancient Space Marine Legions used during the Great Crusade and Horus Heresy eras in the late 30th and early 31st Millennia. These squads were the mainstay of the Legiones Astartes and the force by which the Great Crusade reconquered much of the Human-settled galaxy for the Imperium of Man and its Emperor.

The Warmaster Horus remarked on several occasions that there were few challenges of war that could not be met by, or did not require, the use of such units. It was by the fighting power of thousands of transhuman warriors such as these, armed and armoured for battle in the harshest of environments and the deadliest war zones, that the enemies of Mankind were crushed time and again.

One of the Space Marine Legion's greatest assets in open battle was the massed, coordinated hail of bolter fire its Legion Tactical Squads could unleash. Such was the firepower of this storm of explosive shells that enemy infantry formations and even squadrons of light vehicles would be blasted to the four winds in a single thunderous volley of bolt shells.

In the 41st Millennium, Tactical Squads of the Adeptus Astartes are the most numerous and strategically versatile warriors in a Space Marine Chapter. Where an objective must be seized, it is the Tactical Squads that attack in a storm of gunfire and combat blades. Where the line must be held, these courageous warriors plant their feet, raise their weapons, and fight to the last.

Armed with bolters, grenades, and Codex Astartes-approved heavy and special weapons, Tactical Squads are superbly versatile strategic assets. Yet their greatest weapons are their indomitable spirit and their solar decades of combat experience -- invaluable virtues that combine with the battle-brothers' fearsome arsenal and superhuman physiques to render them amongst the greatest warriors in the galaxy.

Whether sprinting through the firestorm of no man's land, fighting toe-to-toe with bolters blazing or blasting enemy tanks to scrap, Tactical Marines are tireless and steadfast defenders of the Imperium. A Firstborn battle-brother can join a Tactical Squad only when he has first ascended through the ranks of the Scout, Devastator and Assault Squads, meaning that these courageous warriors are experts in every field of warfare.

Led by grizzled sergeants -- many of whom are Veteran Marines seconded from the elite 1st Company -- these squads possess the accumulated wisdom and skill necessary to deal with any situation, no matter how dire. Combined with the array of specialist weaponry they are able to bring to bear, there is no threat in the galaxy over which the Tactical Squads of the Space Marines cannot triumph.

Sergeants have the additional options of using a wider variety of weapons in combat, with most opting for a Bolt Pistol and a chainsword. The sergeant may have fought enough battles to qualify as a Veteran of his Chapter, especially if he has been seconded from the 1st Company. Veterans are often promoted to special command duties or transferred to serve in the 1st Company of a Codex Astartes-compliant Chapter. Sergeants are normally indicated on the battlefield by a red-coloured helmet. Veteran sergeants also add a white stripe to their red helmets to denote this elite status.

In addition to the sergeant, the Tactical Squad is comprised of up to nine other battle-brothers. These Astartes are always armed with the Space Marines' traditional weapon, the bolter. Space Marines have access to all manner of Imperial weaponry but it is with the bolter that they feel most comfortable and with which they have had the most training. Bolters are icons to the Space Marines and feature prominently in the monumental and armorial art of their Chapter. Each weapon is well-cared for. It is blessed and prayed for before combat and competently cleaned and serviced afterwards.

Two of the battle-brothers in a Tactical Squad may be chosen to carry other weapons into combat. One Marine may be designated a heavy weapon squad member, and will carry one of the three types of heavy weapons available to the squad. These are the Heavy Bolter, the Lascannon and the Missile Launcher. These options dramatically improve the tactical flexibility of the squad and improve its chances of success in a wide variety of combat situations.

This is equally true of the Special Weapon Trooper who may be chosen to carry one of the following weapons: a Flamer, Meltagun, Plasma Gun or Grav-Gun. The whole squad will also usually carry grenades of which the most common types are Frag Grenades (anti-personnel fragmentation grenades) or Krak Grenades (producing an armour-piercing blast, intended for use against vehicles). Other grenade types are occasionally used on special missions but are generally restricted to Space Marine officers and squad leaders.

Some of the battle-brothers of a Tactical Squad may eventually fight enough battles to earn Veteran status themselves. These Marines many continue to serve with their original Tactical Squad for a short time but eventually they will be promoted to special duties such as service in the Command Squad or advanced to serve in the 1st Company of the Chapter which is comprised wholly of Veterans. In this way the ranks of that elite company are replenished. To display their status, Veterans of most Chapters commonly wear white helmets.

Space Marines are versatile warriors and the Tactical Squad exploits this quality, allowing it to fulfill a wide variety of combat roles for a Chapter. The Tactical Squad organisation delineated here has proven to be extremely effective in whatever combat situation it has encountered across more than ten millennia of vicious interstellar warfare.

One of the following dedicated transport may be selected by a Tactical Squad: 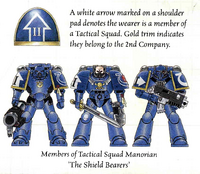