Syll'Esske is the composite name given to the union of the daemonic Herald of Slaanesh Syll Lewdtongue and a Daemon Prince of Slaanesh named Esske.

The Herald of Slaanesh Syll Lewdtongue was once shunned by those in the court of Slaanesh for growing too attached to those meant to be tempted into their own destruction. Syll's unique affection for these charges would, however, eventually lead to glory.

When a mortal war-slave known as Esske, a fighter in one of the gladiatorial arenas of Slaanesh's gardens in the Realm of Chaos, caught Syll's eye, the Daemon Herald decided to guide the mortal to ever greater heights of carnage. Esske's newfound patronage allowed him to ascend all the way to the rank of Daemon Prince, only to be dismissed by other Daemon courtiers as a former mortal.

Syll and Esske joined forces to take revenge on those that had shunned them, combining cunning, speed and brute strength in one deadly tag-team. Carving a bloody path of vengeance to the throne of Slaanesh itself, the two bound their fates forever before the Prince of Chaos in a dark pact.

Now, they are a symbiotic entity known as Syll'Esske, fighting with deadly synchronicity. The alliance which had made them outsiders before, now paved the way for their mutual ascension. 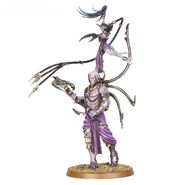 The unholy combination of the Herald of Slaanesh Syll Lewdtongue and the Daemon Prince Esske that is Syll'Esske
Community content is available under CC-BY-SA unless otherwise noted.
Advertisement