Sydonian Dragoons are tried and tested Skitarii warriors of the Adeptus Mechanicus who are given the honour of riding to war atop venerated, stilt-legged Ironstrider Engines. When these mighty contraptions burst from their shrouding fogs, they strike like a spear cast by the Machine God himself. These fearless cavaliers thunder through enemy fire to plunge lance-first into the thick of the enemy’s ranks, the pent-up energies of their taser weaponry blasting the foe back in a blazing storm of sparks. Those foolish enough to mount a counter-assault are kicked across the battlefield or stamped unceremoniously into the dirt by the Ironstrider Engine the Dragoon rides to war. Shouting praise to the Omnissiah, the mechanical knight kicks away the blackened corpses of his victims, already wheeling his steed in search of fresh prey.

Sydonian Dragoons stride battlefields like graven idols given life, charging from clouds of sacred incense to slam crackling Taser Lances into scattering foes. In their wake they leave ragged trails of corpses that stretch to the horizon and beyond. Mounted on the marvel of science that is the Ironstrider Engine, Sydonian Dragoons know not the concepts of doubt nor rest. Theirs is the power of endless motion put to the purpose of death.

The first Sydonians settled a vast cratered area of Mars swathed in dense acidic mist. In the schisms that haunted Mars' past, those with stilt-augmetics could stalk these mists and yet live, their elevation allowing them to escape the worst effects of the acidic fog whilst remaining hidden from the enemy. The Sydonian Dragoons echo the tactics of these past warrior-explorers. Using incense exhausts, they march through an ochre cloud redolent of ancient Sydonia. Many a foe has been confounded by this mist long enough for the Dragoons to mount a deadly charge. Though the monotask servitor that steers each Ironstrider Engine towards the foe is all but mindless, its rider is a tried and tested Skitarii warrior. Once the Dragoon has spotted his quarry, he will mark it with a bullet from his Phosphor Serpenta or Radium Jezzail. The glow from the impact guides his unit's next charge even in the fog of war. Within moments, one so marked is assailed by a stampede of titanium-hard feet and high-yield taser weaponry.

As standard, all Sydnonian Dragoons are armed with:

Any Sydnonian Dragoon can replace their Taser Lance with:

Any Sydonian Dragoon may be additionally armed with: 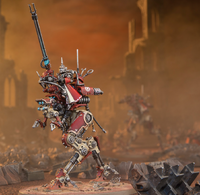 A Sydonian Dragoon from Mars 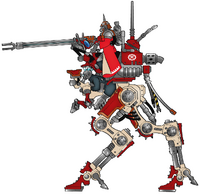 Front view of a Sydonian Dragoon of Mars

Front view of a Sydonian Dragoon of Stygies VIII
Add a photo to this gallery
Retrieved from "https://warhammer40k.fandom.com/wiki/Sydonian_Dragoon?oldid=291907"
Community content is available under CC-BY-SA unless otherwise noted.