"Attack swiftly, and without warning. This is the mantra of the striking scorpions -- it is the way of all our kind."

The Aeldari Aspect Warriors known as the Striking Scorpions epitomise the deadly attributes of their namesake, and they are the most skilled of all the close-assault Warrior Aspects on the Aeldari Path of the Warrior.

They are merciless killers without exception, reveling in the hunt and the kill, using stealth and shadow to cloak themselves from sight until the moment of attack. The Striking Scorpions represent the wrath of the War God Kaela Mensha Khaine, which can fall without warning and with extraordinary savagery upon his foes.

The Striking Scorpions Aspect are one of the deadliest Aeldari Warrior Aspects. Following the Fall of the Eldar, Asurmen, the first Phoenix Lord, was the Aeldari who led the Craftworlds away from the ancient Aeldari homeworlds at the time of the Fall and it was he who founded the first of the Aspect Shrines. He established the first Aspect Shrine, the Shrine of Asur, on the world of the same name. Those who attended the shrine of the Striking Scorpions are the manifestation of viciousness and merciless death.

Perhaps the most sinister aspect of the Striking Scorpions is the legacy of their Chaos-corrupted former master and Phoenix Lord Arhra, "the Father of Scorpions" -- the ability to stalk the shadows and creep ever closer to their prey before falling upon the foe like the wrath of the Aeldari War God Khaine himself, a legacy that often leads them close to the burning anger and bloodlust that could see their souls consumed by Slaanesh.

The history of the Striking Scorpions is shrouded in infamy from the Aspect's very beginning. The founder of their Aspect Shrine, Arhra, was lured to darkness and betrayed Asurmen and the other Asurya, the first Phoenix Lords, by bringing daemons into the First Shrine to wage war upon his fellows. Those loyal to Asurmen were defeated and scattered across the stars, but Arhra himself would eventually flee into the Webway, becoming "the Fallen Phoenix who burns with the dark light of Chaos."

In his place rose Karandras, a Striking Scorpions Exarch and Arhra's greatest pupil, who would give the Striking Scorpions their current form by tempering the murderous nature instilled by their former master with the patience necessary to become consummate hunters. Karandras would be responsible for spreading this new teaching and installing new Striking Scorpions Aspect Shrines on the Aeldari Craftworlds.

The Striking Scorpions are one of the Aeldari Warrior Aspects dedicated to close combat, particularly close combat during infiltration missions in which they must first close with the enemy undetected before unleashing their wrath. Many Striking Scorpions are physically more powerful than standard Aeldari, and can match their Drukhari counterparts for sheer physical power. The signature attack of the Striking Scorpion is made by the weapon pods housed on either side of the warrior's helmet, known as Mandiblasters.

These are small, short-ranged laser weapons used to deliver a deadly energy sting in close combat that can be psychically triggered. A Mandiblaster volley and the blistering storm of attacks from the Scorpions that follow it is enough to tear the heart out of an enemy force. Compared to their closest cousins, the Howling Banshees, Striking Scorpions are not as swift but instead more adept at moving through dense terrain, using every available nook and crevice to lie in wait for the enemy before unleashing their attack. Only those Aeldari of strong physique can become Striking Scorpions in order to wear their armour and wield their weapons.

Striking Scorpions are best deployed to deal with tactical situations in which they face off against large numbers of enemy troops who are weaker than they, though their unusual physical prowess for Aeldari allows the Striking Scorpions to successfully battle foes head-to-head that most Aeldari, even other Aspect Warriors, would avoid, like the Imperial Space Marines or the larger and more powerful varieties of Ork. A squad of Striking Scorpions typically numbers five to ten warriors, one of which is usually an Exarch. This squad can easily fit into a Wave Serpent transport for more rapid movement across the battlefield.

Every Aspect Shrine of the Aeldari is led by an Exarch, an Eldar who has been called permanently to the Path of the Warrior. An Exarch has travelled so far down that Path that he or she can no longer leave it and so dedicates him or herself fully as a high priest of Khaine in service to the Aspect of the War God that he or she represents. Exarchs wear more elaborate and ornate versions of Aspect Armour which incorporates the spirits of their past wearers, granting an Exarch not only wisdom and knowledge stretching across the millennia but a raw pool of potent psychic energy that can be used in combat.

This permanent acceptance of the Aeldari's "war mask" provides Exarchs with enhanced skill and dedication to their craft and entitles them to access their Shrine's oldest and most advanced wargear. Striking Scorpion Exarchs often incorporate the use of several different specialist weapons, including a monomolecular toothed version of the Scorpion Chainsword called the Biting Blade, a claw-shaped gauntlet called the Scorpion's Claw, or the large unique weapon known as the Chainsabre.

Striking Scorpion Exarchs often lead their squads from the shadows, using them to shield their approach from their enemies. Exarchs also train their squads to flow silently and without trace through dense terrain on the battlefield.

Arhra is the only Phoenix Lord to have been completely lost to the Aeldari and his Shrine when his murderous nature ultimately overwhelmed him and led to the consumption of his soul by Chaos, transforming him into a life-destroying monster like the Drukhari. It is believed that after he began walking the Path of Damnation, Arhra fled to the Dark City of Commorragh where he became the first Drukhari Incubi Hierarch and founded the first Incubus Shrine.

Arhra is believed by some Aeldari to have survived into the present and become Drazhar, the Master of Blades, the greatest champion of the Drukhari Incubi. Karandras, a Striking Scorpions Exarch and the greatest student of Arhra, then took over leadership of his Aspect and taught the Striking Scorpions the patience and discipline they needed so that they would not follow in their founder's wake and lose their immortal souls to She Who Thirsts when their bloodlust and murderous desires overtook them.

The last suspected sighting of the Fallen Phoenix occurred in 928.M41, when the Drazhar and Karandras were seen duelling for seventeen days amongst the shattered ruins of the ancient Aeldari world of Zandros. The outcome of this duel is currently unknown. 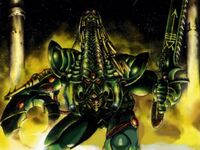 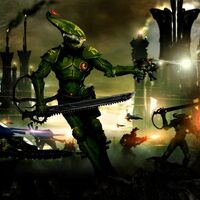 A Striking Scorpion leaping towards the foe 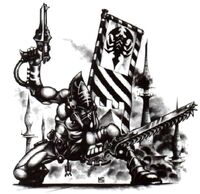 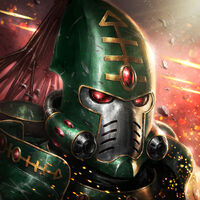 A Striking Scorpions Aspect Warrior of The Hidden Strike shrine

Striking Scorpions Exarch of The Obsidian Claw. Like all Exarchs, they are often marked out by the arrangement of colours on their sensor mane bundles.