Through raging storms and the pounding of enemy flak, packs of Stormwolves surge like the Fenrisian Dragon Ships of old, braving the skies like wild ocean waves. Flying in tight defensive formations, Stormwolf packs usually make up the main body of any Space Wolves planetfall, following in to secure beachheads carved by initial Drop Pod strikes.

The Stormwolf combines breathtaking speed with the freedom of altitude, swiftly closing in on its prey before setting loose a deadly cargo of Space Wolf Astartes or Terminators amongst the enemy, and then bringing to bear sufficient firepower to ensure their landing is uncontested, while providing the necessary fire support afterwards.

Even during adverse atmospheric conditions, the mission is taken without complaint. Any damage taken is shrugged off as inconsequential as the Iron Priests guide their craft in to the landing zone safely even with engines aflame and weapon systems destroyed. Enemy craft never fare so well –- those that dare try to bar the Stormwolves' path discover that despite their role as armoured transports, these hulking gunboats pack a devastating punch. As each such foe plunges away in flames, the Iron Priests raise a victorious howl, their cry echoed by their battle-hungry passengers.

The wolf's head silhouette of the Stormwolf strikes fear into the hearts of any enemy that faces the Sons of Russ, for the presence of such a craft could only signal the imminent arrival of some of the deadliest warriors in the Imperium. Such foreboding is not without good cause, for the Stormwolf is the favoured transport of the Blood Claws, bloodthirsty Space Wolves warriors who are renowned for not holding back once committed to battle.

The following is a list of all known formations containing the Stormwolf:

Taking their name from the freezing tempests that regularly batter the surface of Fenris, the Ice Storm Assault Pack formation excels in planetary assaults where the Space Wolves fight to seize secure drop sites and ferry their battle Packs to the ground. These packs are formed around cores of Stormwolf Assault Boats, with Stormfang Gunships running an escort to ensure no enemy threatens the landfall. As the assault boats thunder in to land, the gunships roar overhead, their Helfrost Destructors spewing beams of ultra-cold energy that freeze the enemy to creaking statues. With their victims trapped in icy tombs, the disembarking Space Wolves pounce upon their easy prey and smash them to bloody, ice-wreathed shards.

The following are a list of notable Stormwolf Assault Boats:

A Stormwolf of the Space Wolves Chapter, front side view

A Stormwolf of the Space Wolves Chapter, left side view 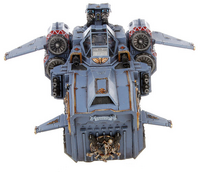 A Stormwolf of the Space Wolves Chapter, front view

A Stormwolf of the Space Wolves Chapter, rear view
Español
Community content is available under CC-BY-SA unless otherwise noted.
Advertisement