"It matters not if the foe faces us on the ground or strikes from the skies. With such craft as these, none shall escape our wrath."

The Stormtalon gunship is an aerial interceptor and ground-attack aircraft that serves in the armies of the Adeptus Astartes. The Stormtalon possesses Vertical Takeoff and Landing (VTOL) capabilities which allows it to hover in place while unleashing its potent barrage as well as engaging in more conventional dogfights like a supersonic interceptor. The Stormtalon is swift enough to engage nearly all but the fastest of enemy aircraft whilst simultaneously being well-armed enough to reduce the chosen foe to a mangle of twisted wreckage and ruined flesh.

The arrival of a single Stormtalon from the war-torn skies has reversed the tide of many desperate battles where the Space Marines on the ground faced certain defeat. The Stormtalon can always be counted upon to deliver a hail of ferocious firepower. Whether its weapons are pointed at enemy ground positions or incoming aerial opponents, it is more than capable of obliterating the threat. The Stormtalon gunship usually operates in a squadron of three, known as a Skyhammer Squadron.

Though smaller than the Stormraven, the Stormtalon gunship is incredibly fast and agile, and makes a superb air-interceptor and ground-attack craft. With the press of a trigger rune, the Stormtalon's Techmarine pilot purges his victims from existence amid a whistling hail of missiles, bolts and las blasts. All the while, the Stormtalon jinks and weaves through blossoming clouds of flak with incredible speed, enemy fire slicing around it to no avail. The Codex Astartes dictates that this small, agile craft is best used as an escort for its larger counterpart, the Stormraven, or to provide covering fire for advancing Space Marine ground forces. However, many Chapters, most notably the White Scars, Solar Hawks and Raven Guard, also employ the Stormtalon as a dogfighter and vanguard strike craft to great effect, whether duelling the aircraft of xenos forces or the winged Daemon Engines of the Traitor Legions.

Stormtalons are often assigned as escorts to other mission-critical units, and this is where the craft truly excels and it is nearly unmatched in this role. At one moment the aircraft can be flying across the battlefield at death-defying speeds; at the next, its pilot can switch over to its VTOL systems and trade its extreme speed for enhanced agility, all the while strafing enemy positions with powerful barrages of shells and missiles.

At the Battle of Cold Steel Ridge, entire squadrons of Ultramarines Stormtalon pilots pushed their craft to the limit. With afterburners propelling their aircraft to bone-jarring speeds, the Stormtalons intercepted monstrous Harpies and flocks of Gargoyles, whose winged bodies were darkening the skies. No sooner had the Stormtalons regained air superiority than the pilots were vectoring their engines, hovering above their Battle-Brothers on the ground and helping to hold back the advancing swarms of charging Tyranids. By using pinpoint strafing tactics and overlapping firepower matrices they cut down hundreds of Gaunts, staining the Macraggian snows purple with rivers of stinking xenos ichor.

There are several Space Marine Chapters, such as the White Scars, Hawk Lords, and the Raven Guard, that believe that close-support and interdiction duties do not fully exert the Stormtalon's potential. In these Chapters, and countless others, they excel at using the Stormtalon as a vanguard strike-craft, where the Stormtalons keep pace with and escort their Assault Marines and Land Speeder squadrons. When the Stormtalon is used in this way, as the principal attack vehicle of an Astartes strike force, the rest of the rapid moving units act as escorts for the aircraft, clearing the attack corridor of enemy anti-air fire as the Stormtalon roars in to obliterate its targets with devastating effect.

A standard Stormtalon Gunship is armed and equipped with:

A Stormtalon Gunship may replace its hull-mounted twin-linked Heavy Bolters with any of the following:

A Stormtalon Gunship armed with a Typhoon Missile Launcher may be equipped with the following loadout:

The following is a list of all known formations that make use of the Stormtalon Gunship:

The Adeptus Mechanicus has not yet made the technical specifications of the Stormtalon publicly available in Imperial records. 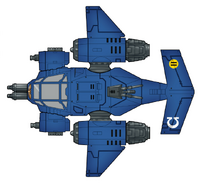 A Stormtalon Gunship of the Ultramarines Chapter, this gunship is deployed with the 2nd Company. Alongside standard Codex markings, many vehicles also show honorifics and kill-signs 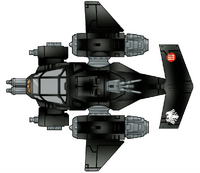 A Stormtalon Gunship of the Raven Guard Chapter. This Stormtalon’s red 3rd Company marking has been discretely placed on the upper side of its tail fin, and it otherwise bears few markings 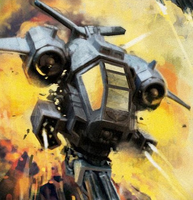 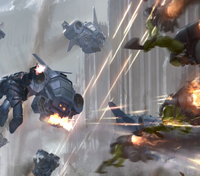 Stormtalon Gunships of the Ultramarines Chapter during combat against the Orks 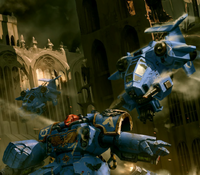 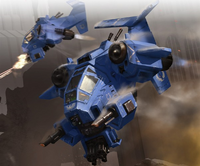 A squadron of Stormtalons during the combat on the Agri-World of Orath
Add a photo to this gallery
Retrieved from "https://warhammer40k.fandom.com/wiki/Stormtalon?oldid=346302"
Community content is available under CC-BY-SA unless otherwise noted.