The Stormsword is a super-heavy tank of the Astra Militarum that is the result of an ad hoc field conversion of a wrecked Shadowsword tank. The Shadowsword's original Volcano Cannon and all of its internal components have been replaced with a massive Hellhammer Siege Cannon, called a "Stormsword Siege Cannon" when deployed on this tank, and internal storage for its huge shells.

Like all of the variants of the Baneblade, the Stormsword came into being as the solution to a specific tactical need, in this case the Imperium's need for a super-heavy tank adapted to urban combat. The first Stormsword was not specifically designed as such by the Tech-priests of Mars. During one long and grinding battle for Coldarkh Hive on a forgotten urbanised world, the Enginseers salvaged a damaged Shadowsword, removed the no longer functional Volcano Cannon, and installed a Hellhammer Siege Cannon in its place. The resulting vehicle was named the "Stormsword" by its crew and both the design and name stuck when the Imperial commanders realised how effective a weapon the Enginseers had cobbled together. Since the resounding success of that battle, Stormswords continue to be crafted and put to use as urban siege engines.

Although the more dogmatic Tech-priests frown upon such field conversions, believing them to be an affront to the Machine Spirits and the Omnissiah, the more pragmatic amongst them judge the worth of a design on its results, and have accordingly standardised and started to produce Stormswords from scratch on their Forge Worlds.

On the battlefield, the Stormsword will only be fielded in those theatres where visibility and range drops to almost nothing, typically during urban or jungle campaigns. The colossal mass of the Stormsword allows it to plow through most obstacles unscathed, while its massive Hellhammer Siege Cannon can obliterate any fortification with a direct hit, and its secondary armament of twin-linked Heavy Bolters and Heavy Flamers allows it to flush out and gun down any opposing infantry with ease.

In the chaos of urban warfare, where range is often measured in metres and progress in the form of single buildings captured or destroyed, neither the relative short range of its armament, nor its poor speed and manoeuvrability hampers the Stormsword when delivering fiery devastation upon the enemies of Mankind. When assaulting a city, the Stormsword will spearhead the attack, blasting any fortified strongpoint to rubble, covering the advancing infantry with its secondary weaponry and motivating them with its very presence. Of all the close support tanks in the Imperium of Man's arsenal, the Stormsword is the most brutally effective.

For all its efficiency, the Stormsword does suffer from some drawbacks: its size and mass are as often a curse as a blessing, for there invariably will be instances where the Stormsword will be too large to fit and yet unable to plow through obstacles. As with all the Shadowsword variants, the Stormsword's fixed main gun requires that the tank be bodily aimed at the target, and the Stormsword's crew must be specially trained to identify and avoid pitfalls where their massive tank would bog down or shed a track with potentially catastrophic results.

The Hellhammer Siege Cannon has a very poor rate of fire, and is actually slightly too large for the Baneblade chassis, allowing a Stormsword to carry only 20 shots, 21 if the crew risks pre-loading the main gun. The Stormsword also lacks anti-armour armament, for only its main gun can destroy enemy armor, and thus the tank needs support from anti-tank infantry units when advancing. Lastly, the Stormsword is all but useless outside of urban combat, due to the short range and poor rate of fire of its main gun combined with the poor top speed and manoeuvrability of all the Baneblade variants.

The Stormsword represents an implementation of STC canon upon which many within the Cult Mechanicus diverge. The vehicle is more invariably the result of modifications made by Tech-priest Enginseers in the field. Most often, they were created by salvaging the hulls of otherwise heavily damaged super-heavy tanks, in particular a number of variants derived from the Baneblade, replacing a destroyed main weapon with a heavy siege gun.

The result was a super-heavy tank that was almost unparalleled in the urban assault role, its massive main gun able to bring down any building and scour defenders from even the heaviest cover. Because of its origins, few Stormswords were exactly the same. Certain Tech-priests claimed however that some perfectly functional Shadowswords and other super-heavies had been deliberately converted into Stormswords for use by the Solar Auxilia Cohorts in urban war operations. If true, this was a significant transgression of a number of rigid doctrines by which the Mechanicum operated and a potential cause of costly doctrinal schism. The Stormsword was also found in the armouries of some of the Space Marine Legions, in particularly the Iron Warriors Legion.

In the 41st Millennium, the Stormsword, a name coined by the Imperial Guard's ancient predecessors, the Imperial Army, is not an officially recognised STC design, and the more conservative elements within the Adeptus Mechanicus look down upon those regiments who deploy them. The Imperial Guard commanders on the ground have a much more pragmatic view of the situation since this pattern of super-heavy tank has more than proven its worth on multiple occasions. In the 41st Millennium, some Forge Worlds have even begun producing Stormswords in limited numbers rather than as conversions of damaged Shadowswords. The most common pattern of the Stormsword is the Arkurian Pattern.

The Stormsword uses the massive Stormsword Siege Cannon as its main weapon. This massive ballistic artillery piece launches a 180-kilogram, rocket-propelled shell packed with enough explosives to bring down most buildings with a single hit. The Stormsword's gunners are trained to aim at the base of the building to ensure its collapse. Due to the size of its shells, the tank can only hold 20 and the reloading process is painfully slow.

The propulsion system for the shells gives the Hellhammer slightly longer range than the more common Demolisher Cannon. The Stormsword is used as a front-line main battle tank during urban battles. The Stormsword clears the way for infantry and other armoured vehicles and it can destroy most obstacles by simply running them over. The tank is also armed with sponson-mounted Heavy Bolters or Heavy Flamers with top sponson-mounted Lascannons, and can be armed with an additional set of sponson weapons. The tank can be outfitted with a pintle-mounted Heavy Stubber or Storm Bolter, a Hunter-Killer Missile Launcher, Improved Communication Systems, Searchlights, a mine sweeper, and Smoke Launchers.

A Stormsword excels at clearing enemy choke points. The shells fired by its Hellhammer Siege Cannon release a concentrated concussive wave upon detonating. Those not outright pulverised by the initial blast are torn apart by the very cover they thought would protect them. Metal barricades are reduced to clouds of shrapnel, and chunks of ferrocrete bunkers are sent hurtling through the air to crush those they once housed.

Known Regiments That Use Stormswords

A Stormsword in the middle of an urban battlefield

A Stormsword readying to fire its Stormsword Siege Cannon at a enemy target.

A Stormsword and Stormblade of the ancient Iron Warriors Legion during the Horus Heresy.

A Stormsword of the ancient Iron Warriors Legion during the Horus Heresy. 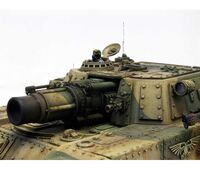 Stormsword of the 6th Cadian Armoured Regiment, the Throne of Ishrehael.
Add a photo to this gallery
Retrieved from "https://warhammer40k.fandom.com/wiki/Stormsword?oldid=353966"
Community content is available under CC-BY-SA unless otherwise noted.