"Follow me Sons of Russ, this night our enemies shall feel the fangs of the Wolf!"

Stormrider is the name of an ornate war chariot that belongs to the Space Wolves Space Marines Chapter and is used by their current Chapter Master, Logan Grimnar. Stormrider is held aloft by anti-grav gyrostabilisers, however it has no means of self-propulsion, and thus it has only ever been drawn forth by a pair of giant Thunderwolves since the time of Russ. Power fields and runes of enchantment are wrought within the chariot’s framework to protect both man and beast from incoming fire, enabling Stormrider to bear the Old Wolf into the heart of the enemy lines unscathed. The ancient war chariot is also outfitted with an in-built hololith projector, allowing the Chapter Master to direct his forces with ease. Grimnar is amongst the Imperium’s deadliest warriors, but when pulled by his Thunderwolves, Tyrnak and Fenrir, he is nigh unstoppable. Stormrider's is maintenance and care taking is provided by Logan Grimnar's chosen Iron Priest, Jens Ironfist.

The following is a list of notable engagements that Stormrider has taken part in:

The following is a list of known formations that Stormrider is a part of: 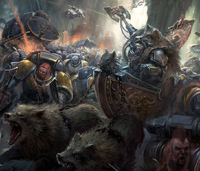 Logan Grimnar atop Stormrider as it is pulled forwards by his Thunderwolves, Tyrnak and Fenrir. 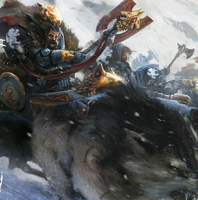 Stormrider and the Thunderwolves Tyrnak and Fenrir. 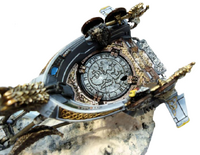 Stormrider as seen from above, the anti-grav and hololith controls are visible.
Add a photo to this gallery
Retrieved from "https://warhammer40k.fandom.com/wiki/Stormrider?oldid=277355"
Community content is available under CC-BY-SA unless otherwise noted.