"We ride upon the wings of the storm. What hope of escape can our foes possibly have?"

The Stormraven gunship is a highly versatile multi-role aircraft found in the Armoury of the Adeptus Astartes. The Stormraven can act simultaneously as an armoured transport, orbital dropship, and strike aircraft.

This aircraft is smaller than the larger and more common Thunderhawk gunship that has been used by the Adeptus Astartes since the Great Crusade, and thanks to its array of vectored thrusters the Stormraven is also much more agile while in flight.

The Stormraven's impressive speed and maneuverability, when used in conjunction with the superhumanly precise skills and reaction times of its Space Marine crew, allows the aircraft to effortlessly evade enemy interceptor fire and manoeuvre at full thrust through the cluttered spires of a hive city or through the mega-fauna of a jungle-covered Death World.

The Stormraven gunship is a relatively recent introduction to the armouries of the Adeptus Astartes. Indeed, as befits a bureaucracy as labyrinthine and cliquish as that of the Imperium of Man, there are no official records to explain the vehicle's emergence.

Certainly, the Stormraven began service and proved its worth within the Grey Knights and Blood Angels Chapters, and some records suggest that it was not meant to see broader use until the Adeptus Mechanicus were fully satisfied with its performance.

However, in such dire times as the late 41st Millennium, when the fate of humanity itself rests on a knife's edge, the Adeptus Astartes need every weapon they can find; sanctioned or not, and many Space Marine Chapters now field a handful of the aircraft alongside their more traditional strike vehicles.

Whilst most Space Marine Chapters utilise their Stormravens in concert with their other transport vehicles, there are a handful who have come to use them as the primary means of deploying Battle-Brothers to an objective, combining, as they do, the swift orbital descent of the Drop Pod with the battlefield versatility of a Rhino or Razorback.

Twelve Power Armoured Space Marines can be accommodated within the Stormraven's adamantium belly, ready to charge out of the gunship once the assault ramp clangs down, or to make an aerial descent via Grav-Chutes should a landing not be possible.

Furthermore, the Stormraven can also carry a mighty Dreadnought in its rear cargo grapples -- it is the smallest Space Marine aircraft able to do so. Yet to use the Stormraven as a transport alone is to overlook its formidable array of weapons. Whilst the precise load-out varies greatly from gunship to gunship, the Stormraven's firepower is easily the equal of a Chapter's most potent land-based fighting vehicles, and more than capable of wreaking untold destruction upon a deserving foe.

The origins of the Stormraven are unknown to the Tech-priests of the Adeptus Mechanicus, although it is whispered that its Standard Template Construct (STC) data file was found by a Techmarine of the Blood Angels Chapter in the early 41st Millennium, located in a long-forgotten Mechanicum archive on Mars.

There also exists equal evidence of the Stormraven having been in the service of the Grey Knights Chapter of the Inquisition's Ordo Malleus even earlier than that.

While the Imperium's cliquish and labyrinthine bureaucracy has no official records explaining the emergence of the Stormraven, there does exist records that show that the Stormraven was first used by the Grey Knights and Blood Angels Chapters, and was not supposed to enter broader use until it had proved its worth within these Chapters and satisfied the Adeptus Mechanicus with its performance.

However, in such dire times as those of the late 41st Millennium, the Adeptus Astartes need every weapon they can find, sanctioned or not, and many Space Marine Chapters now field several Stormravens alongside their other aircraft.

Stormraven gunships streak into battle with their weapons blazing, flak whipping around them as they rake the foe with bolts, blasts and warheads. More akin to a flying tank than a conventional drop-ship, the Stormraven is the most versatile aircraft in the arsenal of the Adeptus Astartes.

Fast, manoeuvrable, resilient, boasting prodigious firepower and a substantial hull capacity, the Stormraven can perform many different roles, but that of heavily armed transport is foremost amongst its abilities. The gunship's troop bay is spacious enough to accommodate even massive Centurion warsuits or Jump Pack-wearing Assault Marines.

Meanwhile, the Stormraven's cargo grapples can bear a Dreadnought straight into the heat of battle, its engine turbines so powerful they can still hold the gunship aloft even with the considerable extra weight. However, this heavy gunship can also go toe-to-toe in dogfights with even the dedicated fighter craft of other intelligent races.

Thanks to its array of vectored thrusters, the Stormraven gunship is quite agile and can perform a number of high-speed manoeuvres. Ground attack is well within its capabilities, for the Stormraven possesses a broad arsenal of anti-infantry and anti-armour firepower. Whether punching enemy aircraft out of the air, ferrying forces into a white-hot war zone, or obliterating the foe with thunderous strafing runs, the Stormraven has proven itself in all aspects of aerial warfare.

The Stormraven is unusually heavily armed and armoured for an aircraft of its size, its firepower easily matching or exceeding even the most potent Imperial main battle tanks. The Stormraven has many times been referenced to as a flying Land Raider.

The Stormraven is armed with a set of hull-mounted twin-linked Heavy Bolters, a Servitor-controlled, dorsal turret-mounted set of twin-linked Assault Cannons, and wing hardpoints capable of carrying up to four anti-armour Stormstrike Missiles.

The aircraft can further enhance its firepower by being outfitted with side sponson-mounted Hurricane Bolters if its pilot is willing to block the aircraft's flank access points.

All Stormraven gunships are equipped with armoured ceramite plating and can be further upgraded with a Searchlight, Extra Armour Plating, and a locator beacon.

The Stormravens employed by the Grey Knights Chapter all make use of the unique system of Aegis armour plating which enhances the craft's protection against the psychic assaults of daemons and other Warp entities by inscribing protective litanies and sacred unguents of the Imperial Creed directly into the aircraft's surface.

Grey Knight Stormravens may be further enhanced with Warp Stabilisation Fields, Truesilver Armour plating, a Teleport Homer, and their Heavy Bolters may be loaded with Psybolt Ammunition.

A standard Stormraven Gunship is armed and equipped with:

A Stormraven Gunship may replace its hull turret-mounted twin-linked Assault Cannons with any of the following:

A Stormraven Gunship may replace its hull-mounted twin-linked Heavy Bolters with any of the following:

A Stormraven Gunship may replace its side access doors with any of the following:

A Stormraven Gunship armed with a Typhoon Missile Launcher may be equipped with the follwoing missiles:

A Stormraven Gunship may take the following vehicle equipment:

The Adeptus Mechanicus has not yet publicly released the technical specifications for this aircraft. 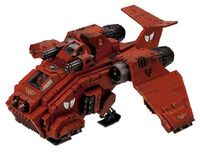 A Stormraven of the Blood Angels Chapter.

An Aegis Stormraven of the Grey Knights Chapter.

A Stormraven of the Ultramarines Chapter.

A Stormraven with its frontal assault ramp open.

A Stormraven Gunship of the Dark Angels Chapter unleashing its missile payload.
Add a photo to this gallery
Retrieved from "https://warhammer40k.fandom.com/wiki/Stormraven?oldid=352219"
Community content is available under CC-BY-SA unless otherwise noted.