"I dunno wot you been told...Stormboy mobs is mighty bold! We're da hardest of da lot...We make you lot look like Grots!"

A Stormboy (pl. Stormboyz) is an elite Ork shock trooper who shows an unusual level of strategic planning and tactical accumen for the Greenskins and is particularly skilled at mobile warfare.

A Stormboy strives to stand out amongst the anarchy of Ork society. They studiously ape authority figures, practise things until they can do them right, and openly polish their boots in public places, much to the disgust of their elders.

Yet no matter how much they fly in the face of Greenskin values with their wilful forward planning and blatant regard for the rules, Stormboyz are still Orks. They live to get stuck into a good, bloody fight as quickly as they can.

To this end, the Stormboy Korps strikes deals with local Meks to equip them with large, noisy Rokkit Packs. These they use to propel themselves toward the foe amid resounding (and suspiciously well-synchronised) bellows of "WAAAGH!", striking the enemy line like ballistic missiles and hacking apart anything unlucky enough to find itself in arm's reach.

Stormboyz serve as the shock troops of many successful Ork warbands and are far too efficient and disciplined by the standards of right-thinking Greenskins. Their contrary stance to the good old-fashioned values of anarchy and disorder manifest in a desire to be organised and obedient.

Nevertheless, they are still Orks, and share the Orkish desire to get into battle as quickly as possible. To this end they go to war strapped to Rokkit Packs that, when activated, propel their wearers forward on great tongues of oily black flame.

Orks grow up faster than Humans, but young Orks sometimes takes a standard year or so to find their place in Ork society. This can lead to feelings of rebelliousness and anger in an Ork youngster, and he may run off to join a Stormboy camp, especially if he is a military-minded Goff or Blood Axe.

These camps provide direction for Orks who are sick of being told they can do whatever they like. Young Orks can become addicted to the regimented life of a Stormboy, and dedicate their lives to the time-honoured martial discipline of drilling, marching and hurtling through the air.

This odd Ork formation serves as a place where a young Ork can rebel against the anarchy of Ork society by following orders, conducting precise military drills and polishing their boots. Heckled and laughed at by most other Orks, the Stormboyz spend solar hours each day marching about and chanting, saluting each other and generally carrying on in very un-Orky ways.

The jeers of the other mobs tend to fade away when battle is joined though and the Stormboyz prove their worth. Using potent Rokkit Packs, they fly into the fray on pillars of smoke and fire. As they age, most Orks leave the Stormboyz for "proper" mobs, but some gain a taste for it, especially Orks of the Blood Axes klan, and will rise to command whole formations of black-booted young Orks.

Despite their strange ways, the Stormboyz are a force to be reckoned with upon the battlefield. They are always eager to prove their prowess to friend and foe alike by putting their battle-drill into practice, and use their Rokkit Packs to ensure they are the first to get stuck in.

Flying into battle is seen as most undignified by the older Ork warriors, who far prefer to charge headlong into the enemy waving their arms and shouting at the top of their lungs. Still, even really old Orks realise that airborne nutcases are invaluable when attacking Imperial bastions and defence lines. After all, a hurtling great lump of rocket-powered Ork can be a very effective weapon in itself.

Unfortunately for the Stormboyz, the volatile Rokkit Packs made by the rare Mekboyz willing to work for them are anything but reliable -- a Mek finds the sight of a malfunctioning Rokkit Pack as amusing as the next Ork. As such, it is a common sight to see a Stormboy corkscrewing into the distance or ploughing into the ground, much to the entertainment of his comrades.

Despite their proclamations of military genius, Stormboy battlefield doctrine is very much a case of pull the lever, shout "Ere' we go!" and hope for the best, as they come crashing down amongst the enemy.

Certainly, the occasional Stormboy is killed or crippled by their descent, but they consider this a perfectly acceptable risk if it gets them to grips with their enemies more quickly.

Examples of Stormboyz icons; rokkits and lightning feature heavily in Stormboyz iconography -- anything that evokes the feeling of screaming through the sky at reckless speeds is popular (and the inevitable destructive impact that follows).

A Stormboyz Mob in the thick of battle.

A Stormboyz assault an enemy position with their Rokkit Packs.

Stormboyz launch a lightning assault against their foes. 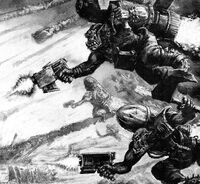 Stormboyz assault the Crimson Fists Chapter during the Battle of Rynn's World. 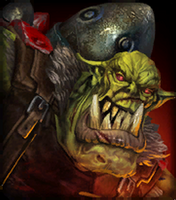 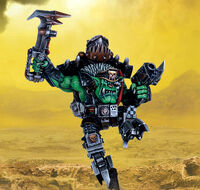 Zagstruk Da Boss, launching himself into the heart of the enemy's battle lines.

Orks Stormboyz being led by a Nob with a Power Klaw. 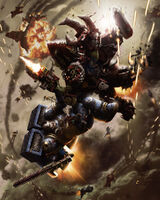