Stormbird is a catch-all term that refers to a series of various super-heavy dedicated attack landers that were once used by the Legiones Astartes as their primary means of deploying forces into combat.

Unlike the spacecraft used later, the Stormbird series is based on an incredibly old and incomplete STC (Standard Template Construct) design and as such consists of multiple classes and patterns of super-heavy flyers.

These super-heavy spacecraft were used nearly exclusively by the Space Marine Legions before the development of the smaller and much easier to produce STC-based Thunderhawk gunship and was often considered the lynchpin of any Space Marine Legion's aviation arm, as it was able to fulfill many combat roles.

The Stormbird was fully void-capable as well as of functioning as an orbital drop ship, an assault lander, a heavy ground attack gunship, a bomber, or as a ground bastion or firebase. This spacecraft was able to quickly carry Space Marine forces from orbiting starships down into the midst of a battle, while at the same time providing supporting fire against enemy ground or air targets.

All known Stormbirds were bulkier and larger than the Thunderhawk and also less agile in flight. However, some Stormbird classes, such as the Warhawk IV, could carry up to the equivalent of a modern Space Marine company, up to 100 Space Marines or the equivalent in vehicles or cargo, far larger than the Thunderhawk's carrying capacity. Some Stormbirds had missiles or bombs slung under both wings while other classes included powerful ballistic cannons mounted on its nose.

While various classes and patterns of the Stormbird have been described, it is not known what most actually looked like, yet descriptions of some classes include folding wings, armoured cockpits with view slits, multiple large engines, and magnetic launch rails used aboard Imperial starships to quickly launch the craft into the void.

However, one of the more modern Stormbirds, the Sokar Pattern, has a nearly full technical data sheet available at present, including telling pict-captures.

The Stormbird originated as the Warhawk and Nephoros-class assault transports and were first utilised by the Yndonesic Bloc for use against the Panpacific techno-barbarian tribes during the Unification Wars on Terra. They were later adapted by the Emperor for His early Space Marine Legions, replacing the aging Skylance gunships used earlier on.

The Stormbird was deployed in great numbers by the Space Marine Legions during the Great Crusade in the late 30th Millennium before being slowly replaced by the Thunderhawk gunship by the outbreak of the Horus Heresy. The Thunderhawk gunship is still used in the late 41st Millennium by nearly all Space Marine Chapters, the Stormbird being an incredibly rare sight even amongst the Traitor Legions.

The Stormbird was void-capable as well as versatile in atmospheric flight. During the Great Crusade, many of the more venerable Legions, such as the Luna Wolves and the Death Guard, made every effort to keep the old, heavy-duty machines in service. They had been delivering Legionaries into war since before the beginning of the Great Crusade in 798.M30.

By the latter years of the Great Crusade, most Imperial expeditionary fleet forces had become reliant on the smaller, STC-derived Thunderhawk and Thunderhawk Transporter.

During this time, even as most Stormbirds were retired from service, there were some that were kept exclusively as transports for a Legion's primarch. These Stormbirds were specially outfitted or adorned and made use of pennants associated with the carriage of such an important individual.

Since the time of the Horus Heresy, while the Stormbird has been phased out of Imperial service by the Adeptus Astartes in favour of the smaller Thunderhawk, these spacecraft are still seen in use amongst several of the Traitor Legions, most notably the Word Bearers.

However, as the dreaded Time of Ending draws near, many Space Marine Chapters are starting to bring their oldest and most powerful weapons and vehicles out of their deepest armouries and reliquaries, and one day the Stormbird may fly in Imperial service again.

At least one variant of the Stormbird, the Warhawk-class Stormbird, made use of massive cavernous launch bays aboard Legion starships that included a series of large magnetic rails. The Warhawks were launched from the rails at extreme speed.

At the ends of the rails were large protective blast doors that would open when the spacecraft were launched. When opened, gravitic integrity fields would energise to protect the inside atmosphere from rushing out from the bay into the void.

The spacecraft were stored on loading bays at the head of the launch rails, and their wings could be extended and retracted for easier storage within the crowded landing bays.

It is not known exactly what the transport capacity of the various Stormbird patterns are, save the Sokar Pattern, which can carry 50 Astartes, Jump Infantry, Rapier batteries, Astartes Bikes and Jetbikes.

The Sokar Stormbird may carry Dreadnoughts of any type, each of which takes up the room of approximately 10 Astartes. Dreadnoughts can only embark/disembark using the aircraft's main ramp.

The Sokar Pattern can also carry as part of its standard complement a single Rhino armoured personnel carrier which takes up the capacity of 12 Astartes, though the Rhino may carry Astartes within it as well during transport.

The following is a list of known uses for the various Stormbird classes:

The Stormbird was one of the few widely-used Imperial vehicles that was not based upon an intact Standard Template Construct (STC) design, as such the Stormbird had many different patterns and variants. The following is a list of all known craft designated as a Stormbird:

The Adeptus Mechanicus technical specifications for this ancient spacecraft are not yet publicly available.

A Sokar Pattern Stormbird of the Imperial Fists Legion 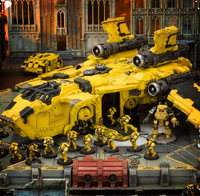 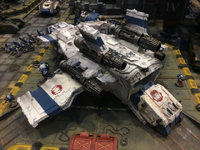 A Sokar Pattern Stormbird of the World Eaters Legion with a Deimos Rhino disembarking down its rear ramp
Español
Community content is available under CC-BY-SA unless otherwise noted.
Advertisement