A Storm Shield is a Power Shield that is used by the Space Marines and sometimes by Inquisitors of the Ordo Malleus to provide an extreme form of protection from ranged weapons fire and potent melee strikes. The Storm Shield is a much larger and more rare version of the Combat Shield and is usually used by only the most decorated of Astartes, often Vanguard Veterans or Veterans wearing Terminator Armour. Unlike the Combat Shield, which is attached to the user's arm and thus allows the hands to remain free, the Storm Shield is heavier and needs to be carried in one hand. The Storm Shield is equipped with an internal gravitic energy field generator which renders all but the most powerful blows completely ineffective. The shield provides protection against both melee and ranged attacks and it is able to withstand an assault from even heavy weaponry like a Lascannon or a direct hit from an artillery piece. When the generator is activated, the shield shimmers with blue energy and when struck it emits crackling lightning, which gives the Storm Shield its name. While Storm Shields are most commonly used by Space Marine Terminators, there are also many Daemonhunters and other members of the Inquisition who use them. The most common variant of the Storm Shield is forged to look like the Astartes' Crux Terminatus and is wielded by Vanguard and Terminator Veterans who intend to engage primarily in melee combat. It is often paired with a Thunder Hammer. 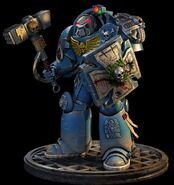 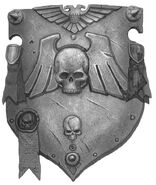 The Bastion Unwavering, Chapter relic of the Angels of Redemption

The Levin Shield, Chapter relic of the Storm Wardens

Hyrdraphur Pattern Suppression Shield utilised by the Adeptus Arbites
Add a photo to this gallery
Retrieved from "https://warhammer40k.fandom.com/wiki/Storm_Shield?oldid=201867"
Community content is available under CC-BY-SA unless otherwise noted.