The Storm Eagle is a heavy assault gunship used by the Chapters of the Adeptus Astartes as a heavy tactical air support unit. Storm Eagle gunships will follow a Space Marine Chapter's Thunderhawk gunships and Drop Pods into battle, where it can lend its weapons to a devastating aerial assault.

The Storm Eagle mounts an impressive amount of firepower for an aircraft of its size and is also capable of transporting twenty Space Marines directly into the thick of a ground assault.

The Storm Eagle assault gunship was one of the most numerous designs found in a Space Marine Legion air-fleet during the Great Crusade. A dedicated tactical strike unit, its primary roles are orbital assault deployment of Space Marine infantry forces and low-level ground attack.

The Storm Eagle is a rugged and durable machine, very heavily armed for its size, and considerably protected by armour plating, although it lacks the speed and manoeuvrability of true fighters and bombers.

In operational use it proved itself an extremely flexible aircraft, serving capably as a long-range transport, orbital shuttle, scout and interceptor when called upon to do so in addition to its main battlefield roles.

The Storm Eagle gunship is a design that dates back to the time of the Great Crusade in the late 30th Millennium, where it was deployed alongside the larger and more numerous Stormbird and Thunderhawk designs used by the Space Marine Legions' space and aircraft-fleets. It is closely related in design to the Stormraven.

The Storm Eagle was a dedicated tactical strike unit and was very heavily armed for its size, but lacked the Space Marine transport capacity of the other patterns of gunships.

The Storm Eagle was first constructed on Terra, but as the Great Crusade pushed further and further out into the galaxy, the principal sites of Storm Eagle manufacturing shifted to the Mechanicum Forge Worlds of Tigrus, Galatea, and Anvilus IX, all of which are primary-grade Forge Worlds whose vast industrial output was sufficient to supply all of the Space Marine Legions and the Custodian Guard with large numbers of these well-regarded and adaptable aircraft.

Unfortunately for the Imperium, all of the aforementioned Forge Worlds suffered catastrophic damage during the Horus Heresy and the Standard Template Construct (STC) pattern for the Storm Eagle was thought to be lost during this tragic period of history, making further manufacture of this gunship impossible for the Imperium after the end of the Heresy in the early 31st Millennium.

Although several Space Marine Chapters have managed to keep a sizable core of Storm Eagles operational down through the centuries, during the later years of the 41st Millennium the number of Storm Eagles in active service has actually begun to increase, especially amongst those Chapters known to have favourable relations with the Adeptus Mechanicus.

This has led some observers to believe that production has been restored at an as yet unknown location.

The forward hull-mounted twin-linked Heavy Bolters can be replaced with twin-linked Multi-Meltas or a single Typhoon Missile Launcher. The Storm Eagle can also carry up to 4 Hellstrike Missiles or Tempest Rockets under its wings.

Alternatively, the Storm Eagle can equip two twin-linked Lascannons under its wings. The aircraft can be upgraded with a searchlight that is used to illuminate enemy ground forces and extra armour plating for additional protection from enemy fire.

Storm Eagles are also commonly outfitted with an additional layer of ceramite plating, for added protection against enemy fire.

A standard Storm Eagle Gunship is armed and equipped with:

A Storm Eagle Gunship may replace its set of hull-mounted twin-linked Heavy Bolters with any of the following:

A StormEagle Gunship may replace its two wing-mounted Hellstrike Launchers with:

A Storm Eagle Gunship armed with a Typhoon Missile Launcher can use the follwing types of munitions:

During the Great Crusade and Horus Heresy the Storm Eagle Gunships of the Legiones Astartes featured different weapon load-out options than those still found during the 41st Millennium.

A standard Legion Storm Eagle Gunship is armed and equipped with:

A Legion Storm Eagle Gunship may replace its set of hull-mounted twin-linked Heavy Bolters with any of the following:

A Legion StormEagle Gunship may replace its 4 wing-mounted Tempest Rockets with any of the following:

While the Storm Eagle dropped out of use amongst the Adeptus Astartes when the two Forge Worlds that produced it in the greatest numbers fell during the Horus Heresy, many Chaos Space Marine warbands retained their vessels and, so it appears, the secrets of maintaining them.

Though rarely deployed in great numbers, the Heretic Astartes have continued to make use of their Storm Eagles throughout the Long War. The craft are well-suited to the wars the Traitors wage, for many attacks are carried out by small bands of elite warriors launching precise, bloody assaults upon specific objectives.

Those Storm Eagles serving in the ranks of the Heretic Astartes warbands are often very different from those serving with the Adeptus Astartes. Their Machine Spirits are corrupted and cruel, and their armour is clad in fell runes and ghastly trophies. In many cases, the vessel's systems have mutated, either under the direction of a Warpsmith or else spontaneously through prolonged exposure to the Warp. 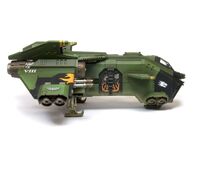 A Storm Eagle of the Salamanders Chapter, side view. 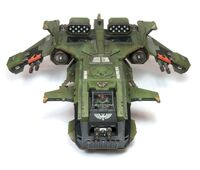 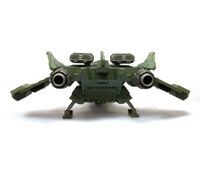 A Storm Eagle of the Salamanders Space Marine Chapter.

A Storm Eagle of the World Eaters Legion, side view.

A Legion Storm Eagle of the Dark Brotherhood; note that this vessel was used by the Blackshield leader called the Nemean at the Conclave of Optera, and bears heraldry and adornment unique to him and which hint at his origins; the text on the vessel's flanks appears to reference several battles of the Third Rangdan Xenocide.

The Space Wolves Legion Storm Eagle The Red Storm of Fenris, which took part in the Razing of Prospero.

An Anvilus Pattern Storm Eagle Gunship, Roc sub-pattern, of the Minotaurs Chapter; this vehicle was part of the 7th Tactical Reserve Company.

A Storm Eagle of the Angels Revenant Chapter, this spacecraft was found drifting in the void on the coreward border of the Orpheus Sector; its vacuum seals were damaged and its crew missing.

A Chaos Storm Eagle of the Renegade Slaughterkin warband, Scourging of Kerrack, 933.M41; the distinctive bone white and blood red is adorned with numerous ritual markings thought by the Ordo Malleus to represent kills enacted in the name of the Blood God, Khorne. 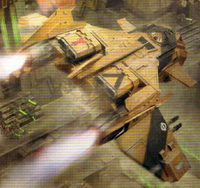 A Storm Eagle in flight during the Necron invasion of the Orpheus Sector during the Orphean War.

A Storm Eagle in flight.

A squadron of Storm Eagles in flight.

A Storm Eagle of the Salamanders Legion coming in for a landing during the Horus Heresy. 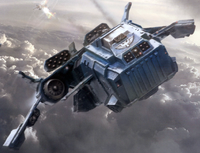 A Storm Eagle of the Alpha Legion in flight.
Español
Community content is available under CC-BY-SA unless otherwise noted.
Advertisement