The Storm Bolter is a double-barrelled version of the standard .75 calibre bolter. As it is heavier and causes more recoil than a normal bolter, it is even more rarely used than the bolter by the regiments of the Astra Militarum.

Instead, Storm Bolters are the standard weapons employed by Space Marine Terminators or as a pintle-mounted weapon on an Imperial main battle tank.

Storm Bolters are also used by the Astartes of the Grey Knights Chapter as a gauntlet-mounted weapon with its feed located on the rear of their armour.

The Storm Bolter also sees limited use amongst the Orders Militant of the Adepta Sororitas, where it is considered a specialist weapon, and favoured by those squads of Dominions, the Sororitas' heavy-weapons troops, who prefer to engage in mid-range, anti-infantry combat.

Due to its high munitions consumption, and the lack of dexterity available to the wearer of Terminator Armour, most Storm Bolters are fed from a large box magazine, carrying approximately 100 bolts. These bolts are identical to those fired from Bolt Pistols and bolters.

Before the Storm Bolter was created by the Tech-priests of the Adeptus Mechanicus after the end of the Horus Heresy, Terminators were often equipped with two separate bolters outfitted with advanced targeting equipment and restricted firing rates to allow them to operate in tandem.

These were called "Combi-Bolters" and they were less effective than the first true Storm Bolter design. They are now only used by the Chaos Space Marines of the Traitor Legions, many of whom still have access only to the pre-Heresy technology.

A schematic of a Storm Bolter 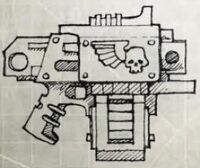 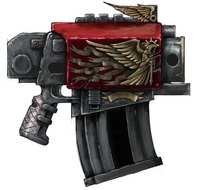 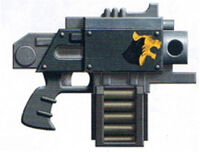 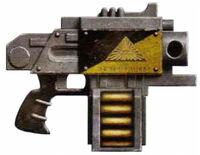 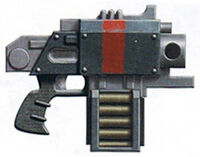 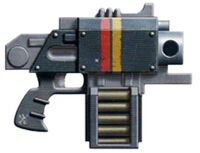 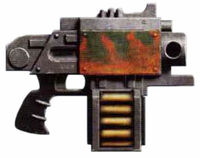 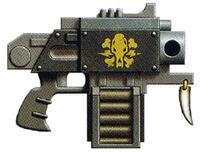 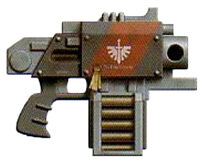 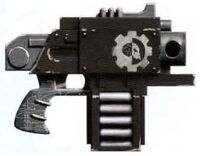 Ultima Pattern Storm Bolter of the Sons of Medusa Chapter 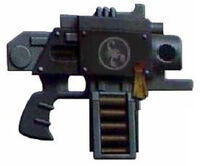 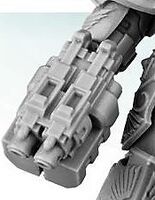 A Lastrum Pattern Storm Bolter used by the Terminators of the Adeptus Custodes
Español
Community content is available under CC-BY-SA unless otherwise noted.
Advertisement