— Unnamed Ork on the world of Tartarus

An Ork Stikkbomb (pl. Stikkbombz), is an anti-infantry fragmentation grenade commonly utilised by Ork forces. Ork grenades are much bigger and heftier than those used by the other intelligent races, which makes good sense to an Ork because the bigger something is, the more dangerous it will be. Stikkbombz are made up of a can filled with crude explosives which is screwed onto a stick so that it can be used as an equally crude mace if necessary. Mekboyz churn out Stikkbombz by the score and mainly two sorts -- Frag and Krak Stikkbombz. Frag 'bombz detonate with a dull explosion and shower shrapnel and fragments of casings over a wide area. Krak 'bombz detonate with a high-pitched snapping noise and punch a dirty great hole through whatever it is they have hit. Krak bombz are harder to throw because they have to strike the target "head first." There also exist "Suppa Stikkbombz", which are little more than multiple Krak Stikkbombz strapped or bolted together and wired to a single detonator. Meks often build them to add a little more armour penetration to their explosives, at the cost of operational safety (such as it already is).

Stikkbombz in the Warhammer 40,000 universe resemble the German Model 24 Stielhandgranate used in World War II, which were also known to British soldiers as "stick bombs" or "potato mashers". 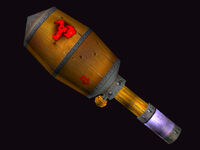 A typical Ork Stikkbomb
Add a photo to this gallery
Retrieved from "https://warhammer40k.fandom.com/wiki/Stikkbomb?oldid=295172"
Community content is available under CC-BY-SA unless otherwise noted.