"Iron Within, Iron Without!"

The Steel Brethren, also known as the Steel Brotherhood, are a warband of Chaos Space Marines drawn from the Iron Warriors Traitor Legion. Following their parent Legion's path, they are dedicated to Chaos Undivided. They have been noted to make extensive use of gunship transports and Drop Pods in their planetary assaults.

The Steel Brethren wear primarily metallic, steel-coloured Power Armour, with black on the inset of the shoulder plates, essentially a minor variation of the standard colour scheme employed by the Iron Warriors.

The Steel Brethren's warband badge is two red Iron Halos that are interlinked on a black background. 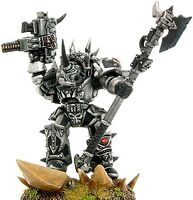 A Steel Brethren Infernal Relic Predator Annihilator Battle Tank. This vehicle took part in the Siege of Vraks.
Add a photo to this gallery
Retrieved from "https://warhammer40k.fandom.com/wiki/Steel_Brethren?oldid=336817"
Community content is available under CC-BY-SA unless otherwise noted.