A Starweaver is a specialised anti-gravitic skimmer-transport utilised exclusively by the mysterious Eldar Harlequins. On the battlefield, Starweavers streak across as a storm of shattered light, relying upon a mixture of velocity and misdirection to confound the enemy's aim. Echoing the sky chariots of the ancient Eldar, these swift attack vehicles have a transport platform at their rear capable of bearing a Troupe of Harlequins into battle. Such is the skill of the Harlequins that they can leap over the sides of the Starweaver directly into battle, or vault back onto its platform in a heartbeat should they be needed elsewhere. Even once their passengers have joined the melee, Starweavers remain potent attack craft, spinning and jinking as they pour a storm of firepower into the bewildered foe. Travelling through the Webway is a perilous task, the Harlequins making use of fast-moving Starweavers to get to their destinations. Obscured by holofields, their shattered images only coalesce when they remain stationary. But by then, it's already too late for their foes.

Harlequins straddle the line between Craftworld Eldar and their dark kin of Commorragh, residing in that grey area between noble austerity and wicked depravity. As a result, their weapons and wargear often have different origins, some created by craftworld Bonesingers, some manufactured by Dark Eldar artisans and others a deadly combination of the two. The Starweavers and Voidweavers of the Harlequins are a prime example of this technological fusion, the sleek shape of the two craft reminiscent of both the Eldar Vyper and the Dark Eldar Venom. The long nose and rib-like anti-grav plates are similar in design to the Eldar craft while the crew compartment shares much with the Dark Eldar one, the balustrades very similar to those on the Venom and the Raider. The wings are a combination of Dark Eldar Razorwing engine design and Eldar Hemlock Wraithfighter vanes and aerofoils. The result is two vehicles that, like their pilots and passengers, straddle the line between the darkness and the light. All Eldar and Dark Eldar vehicles feature large curving armour panels, and those of the Harlequins are no exception.

The Starweaver is named for the first and greatest son of the Cosmic Serpent. The Cosmic Serpent is a significant totem to the Harlequins, for he is said to have existed in both the material and psychic universes at the same time, and his strange and capricious young acted as occasional allies to Cegorach. Starweaver was the most noble and courageous of his serpentine brood, and swiftly made common cause with the Laughing God. The serpent freely gave his aid to Cegorach and, in tales such as the Humbling of Eldanesh or the Flight from the Grave of Stars, even suffered the Harlequins' deity to ride through danger upon his back. So do the Harlequins mount their Starweaver transports with reverence, for their actions echo those of Cegorach himself.

Like all Eldar craft, the Starweaver is long and streamlined, its bird-like appearance reminiscent of the Eldar sky chariots of old. Its forked nose conceals a Shuriken Cannon, which nestles between the anti-grav plates that keep the Starweaver aloft. The rear half of the craft is an open-topped crew compartment that's typically austere, with an internal running board to sit or stand on and a rear stabiliser fin complete with a rappelling line. Starweavers hurtle into battle at breakneck speed. The craft swoop and spiral effortlessly through incoming fire, anti-grav engines screaming as they bear their Harlequin passengers unerringly into the maelstrom of combat. These craft are lightly armoured and incredibly nimble. Further protection is offered by flickering layers of holofields and Mirage-Launchers that reduce the craft to little more than a technicolour blur when on the move. Alongside these cunning countermeasures, the Starweaver packs a hefty punch, mounting multiple shuriken or haywire weapons that provide supporting fire for the Harlequins once they have leapt into the fray.

The Starweaver rune signifies an honoured steed and, conversely, a wise and noble hero.

Starweavers bear their masque's colours (in this case, the Masque of the Midnight Sorrow), their masque's rune, and the rune of the Troupe that the craft is assigned to -- be it Light, Dark or Twilight. 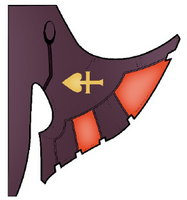 Varying configurations of coloured panels serve to distinguish different Starweaver squadrons.
Add a photo to this gallery
Retrieved from "https://warhammer40k.fandom.com/wiki/Starweaver?oldid=291145"
Community content is available under CC-BY-SA unless otherwise noted.