The Starcannon is the most common form of Aeldari Plasma Weapon, and makes use of a small nuclear fusion reaction to superheat a stream of matter into its plasma state.

The Starcannon is a rapid-fire weapon and its potent blasts are able to pierce all but the heaviest types of armour worn by infantry. It is also hauntingly accurate due to its use of a sophisticated electromagnetic pulse to guide its lethal blasts to enemy targets.

The Aeldari Starcannon is far superior to its Imperial counterparts as the core of the Aeldari Plasma Weapon is protected by a sophisticated series of electromagnetic containment fields to ensure the weapon will never overheat in the hands of its wielder, despite producing the incandescent heat of a sun.

However, a Starcannon is too large to be carried by infantry and is only mounted on Aeldari vehicles, such as Wave Serpents, Falcons, and War Walkers, or fire support platforms which commonly accompany Guardian squads.

Despite this limitation, the Starcannon is favoured by many Aeldari commanders due to its sheer destructive power. 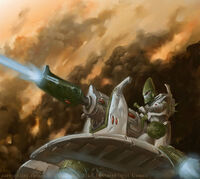