The Star Kindred is a Genestealer Cult that infests the long-forsaken Gleptid Reach and claims to worship the Emperor of Mankind in the form of a holy sun that shines in the firmament.

In truth, they worship that which lies beyond the sun and stars, those unknowable entities that haunt the black velvet pall of endless night. One day, the Star Kindred preach, the dark glory of the void will swallow the light of the Gleptid Reach's sun once and for all, and the truth alone will survive.

The Star Kindred's Maguses claim to have seen in their psychic visions a great eclipse that will swallow the sun on the day of reckoning -- though they do not realise that the scenes they depict in their holy texts portray not one celestial body before another, but a Tyranid bio-ship so vast it causes a solar eclipse. 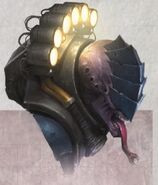 An Acolyte Hybrid of the Star Kindred

An Acolyte Hybrid and Neophyte Hybrid of the Star Kindred Cult
Add a photo to this gallery
Retrieved from "https://warhammer40k.fandom.com/wiki/Star_Kindred?oldid=346469"
Community content is available under CC-BY-SA unless otherwise noted.