The Stalker is an adaptation of the Hunter Standard Template Construct (STC) that was unearthed by the Adeptus Mechanicus only a few standard millennia ago. Mounting a pair of independently tracking Icarus Stormcannons, the Stalker can target multiple enemy contacts, stitching the skies with a hail of armour-piercing death.

The Stalker is a relatively new addition to the armouries of the Adeptus Astartes, having only been put into production relatively recently after its STC data was rediscovered.

The Stalker is a vital part of a Space Marine Chapter's armoury and it is deployed as a rapid-firing anti-aircraft platform that is able to track and engage multiple enemy targets simultaneously.

The Stalker's front and flank armour is thicker than most other Rhino-chassis-based vehicles, allowing the Stalker to deflect or absorb more incoming enemy fire.

The Stalker's sides also feature hydraulic stabilisers that anchor the vehicle to the ground so that when it fires its anti-aircraft artillery it suffers no recoil and loss of accuracy.

Space Marine battle tanks are not permanently attached to any one company. Instead they form a vehicle pool, and individual tanks are available for deployment to Space Marine commanders as required.

Upon its creation, a Space Marine battle tank is assigned a name that reflects its role as a protector of the Chapter's brethren. From that point onwards, the vehicle is as much a part of the Chapter as the Space Marines themselves, and over the years its many deeds and victories will be celebrated as greatly as the Chapter's flesh and blood heroes.

The Stalker is an anti-air variant of the standard Astartes Whirlwind Artillery Tank. The Stalker replaces the Whirlwind's Whirlwind Multiple Missile Launcher with an Icarus Stormcannon Array. Unsubtle and devastating, the Icarus Stormcannons are a twinned array of multi-barrelled ballistic cannons that have the capacity to track multiple targets at once.

Each cannon is shackled to separate servo-minds that direct the cannon independently of each other. The weapons can fire upon separate targets, or if needed they can both fire upon the same target.

Each salvo fired from the Stormcannons fills the air with hundreds of rounds of ammunition that are capable of tearing even the greatest winged Tyranid beast or potent enemy flyer from the sky.

The Stalker is capable of unleashing its Stormcannons in two different firing modes depending on the situation, as follows:

A standard Stalkerr is armed and equipped with:

A Stalker may take one of the following pintle-mounted weapons:

Stalkers may also have a variety of vehicle equipment such as:

The following is a list of known formations used by the Stalker:

A Stalker of the Black Templars Chapter, side view. 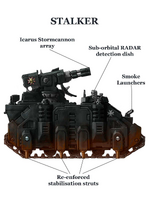 Schematic of a Black Templars Stalker. 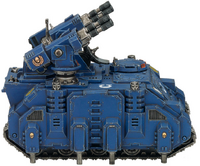 A Whirlwind Stalker of the Ultramarines Chapter, side view. 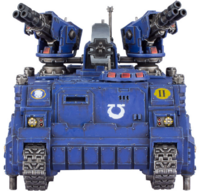 A Whirlwind Stalker of the Ultramarines Chapter, front view.

A Whirlwind Stalker of the Ultramarines Chapter, dorsal view.

Close up view of the Stalker's hydraulic stabilisers.

A close up view of the Stalker's improved frontal armour.

A close up view of the Icarus Stormcannon Array's targeting equipment.
Community content is available under CC-BY-SA unless otherwise noted.
Advertisement