The Staff of Ulthamar was a famous psychically-impregnated staff wielded by Farseer Eldrad Ulthran of Ulthwé. It was similar to a Witchblade in combat, but had the added benefit that its damage would ignore a foe's armour to assault the being within directly.

This made the Staff of Ulthamar an incredibly formidable close combat weapon, capable of carving through even Abaddon the Despoiler's ancient Terminator Armour during the titanic clash between the Chaos Lord and the Farseer upon the world of Andante IV during the 13th Black Crusade in 999.M41. The Staff of Ulthamar also served to channel Eldrad's already potent psychic powers into a force to be reckoned with.

In prior canon it was assumed that the Staff was lost, along with Eldrad, aboard a Slaanesh-possessed Blackstone Fortress high above the Imperial Fortress World of Cadia during the final battle of the 13th Black Crusade.

Since the change in the outcome of the 13th Black Crusade to result in the fall of Cadia, Ulthran was never present at that battle, and still wields the Staff of Ulthamar in the era of the Great Rift as an ally of the Ynnari. 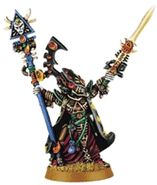 Farseer Eldrad Ulthran wielding the Staff of Ulthamar.
Add a photo to this gallery
Retrieved from "https://warhammer40k.fandom.com/wiki/Staff_of_Ulthamar?oldid=331663"
Community content is available under CC-BY-SA unless otherwise noted.