"Don’t poke at ‘der Squiggoths ya’ snotling-brained oaf! ‘Dey don’t like it, an’ it hurts ‘der feelins. So don’t ta holler at me if dey eats yer fingers."

A Squiggoth is the largest species of Squigs, a form of ravenous Orkoid creature used by Orks as food and pack animals. Squiggoths are most commonly used by pre-industrial Feral Orks, but can be found among their more technologically advanced spacefaring counterparts as well. However, this variety of Squig is just as capable as a weapon, and can sow devastation in its wake as it transports Ork Boyz and their weapons across the battlefield. The Magos Biologis of the Adeptus Mechanicus have identified Squiggoths as fungal lifeforms, though they are fairly rare and can only be grown to their largest size by the specialist breeder Pigdokz of the Snakebites Clan. The size of the Squiggoth is determined by the effectiveness of the feed-formula the breeder gives his creature. A Squiggoth's size ranges from that of a Leman Russ tank to that of a small Titan, although generally they are somewhere between these two extremes of size. Squiggoths are reptilian in nature and resemble Terran dinosaurs, although there have also been reports of mammoth-like Squiggoths adapted to cold climates that possess heavy fur and tusks. Squiggoths used for combat will have armoured barding placed around the creature's neck and head, along with a small armoured howdah (or even a fort on the largest Squiggoths) built on the creature's back. The fort carries Ork Boyz, along with powerful Ork artillery pieces such as Supa-Lobbas.

The pinnacle of the Runtherd’s art, the Squiggoth is the largest and most aggressive of all the Squigs. Bred primarily by the Snakebites and sold to any warband or tribe who can afford them, Squiggoths are massive, reptilian quadrupeds with a mouth full of wicked teeth and an incredibly savage demeanour. Each Runtherd has his own special recipe of Squiggoth feed, and these recipes are constantly modified and tinkered with to eke out the maximum amount of growth possible. The smallest Squiggoths, although still huge and very dangerous, are the product of inferior, low-quality feed mixes, and are considered runts among their larger cousins. Large Squiggoths are the result of carefully crafted diets (supplemented by any Orks who stray too near their mouths). The largest of all, the legendary and vanishingly rare Gargantuan Squiggoths bred in the pits of the Snakebites, gain their size and strength from the very best and most potent feeds available to their Ork caretakers.

Squiggoths are used as a combination battle tank, personnel carrier, and mobile siege engine. Their size, utility, and mindless aggression appeal to the Orks on a visceral level, and much like most aspects of Ork “kultur,” Squiggoths seem to be perfectly honed to suit their role and to appeal to the base tastes of their masters. In their natural, unaltered state, Squiggoths make excellent beasts of war. Their massive frames are draped in a thick, scaled hide that provides considerable protection, and their brute strength, massive tusks, and crushing feet can pierce even the strongest defences. An angry Squiggoth set loose on a battlefield can strike terror into even the most stalwart heart. Of course, being bestial and relatively dimwitted, Squiggoths are hard to train and hard to control, when they are not simply eating their so-called owners.

While feral Orks and those of the Snakebites clan are certainly wont to field Squiggoths as they came from the crèche and use them simply as beasts of burden to transport Boyz, the other clans fit a number of upgrades to their huge and savage pets. When outfitted for war by most of the clans, a Squiggoth is first fitted for a suit of Squiggoth armour, an articulated suit of cobbled barding. Along with the armour, Squiggoths are fitted for fighting platforms called Howdahs, which mount heavy weapons and carry an assortment of Boyz, both inside and hanging on straps and chains outside. The Howdah serves as both a mobile artillery platform and an ersatz armoured personnel carrier, bringing Boyz into the fight and providing heavy fire support to Ork forces engaged with the enemy. Like their less domesticated cousins found among the Snakebites and feral Ork tribes, these armoured Squiggoths can cause incredible damage with their natural weapons, and while the Boyz in the Howdah gleefully blast away with their heavy guns, their mount is usually hard at work biting, goring, and stomping flat anything that comes within reach. Gargantuan Squiggoths often mount an entire fortress on their back, a fortified and enclosed pillbox bristling with artillery and heavy weapons, and is perhaps one of the most destructive engines of war in the galaxy. Thankfully, such monstrosities are incredibly rare.

There are two recognized subspecies of Squiggoth, which like most Orkoid creatures are differentiated by their size. This size is dependent upon the effectiveness of the feed-formula they were given after birth, and so there is actually a large variance in both the size and shape of each individual Squiggoth that will be encountered. However, the Ordo Xenos of the Inquisition currently recognises these three subspecies: 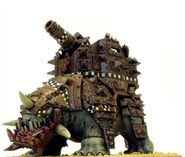 A Big Squiggoth with a Supa-Lobba emplacement on its back 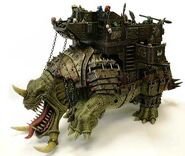 A Feral Ork Gargantuan Squiggoth grown by the Snakebites Clan
Add a photo to this gallery
Retrieved from "https://warhammer40k.fandom.com/wiki/Squiggoth?oldid=334166"
Community content is available under CC-BY-SA unless otherwise noted.