Speed Freeks are those Orks who who become addicted to the sensation of pure speed. These speed-obsessed Greenskins band together in their own mobs and warbands, which are full of buggies, bikes, and Trukks. They belong to what Ork kultur refers to as the Kult of Speed and become members of the Speed Freeks. These grinning loons roar into battle on exhaust-belching jalopies and crude but effective flying machines, intent on getting into the thick of the fighting before their ground-pounding comrades. Most vehicles used by Speed Freeks are painted red as, according to Ork superstition, "Da red wunz go fasta!" Due to the large number of vehicles in each warband, they often have several of the Oddboyz known as Mekboyz amongst their number to keep their vehicles running. Sometimes a warband of Speed Freeks is even led by a Big Mek instead of a Warboss.

Orks possess an inherent need to go fast. There is something about speed that fulfils some deep need in the Orkish temperament, just like the thunder of guns, the clank of tracks or the din of battle. They like to feel the wind whipping into their faces and to hear the throaty roar of supercharged engines. It is hardly surprising that bikes and buggies of all kinds are popular with the Orks. These up-gunned vehicles may not be as sturdy as those used by the Imperium, but they are cheap, can pack a massive amount of firepower and, most important of all, they can achieve truly suicidal speeds.

Some Orks become addicted to the sensation of speed and join the Speed Freeks, the name for those Greenskins who belong to the Ork Kult of Speed, a Kult whose members rarely if ever get out from behind the handlebars or steering wheels of their light vehicles. These grinning greenskinned lunatics roar into battle ahead on exhaust-belching jalopies and crude but effective flying machines, intent on getting into the thick of the fighting before their ground-pounding comrades. Due to the large number of vehicles in each Speed Freek warband, they often have several of the Oddboyz known as Mekboyz amongst their number to keep the Battlewagons and other vehicles and aircraft running smoothly. Sometimes it is even a Mekboy who leads the warband as a Big Mek. The obsession with speed can affect any Ork -- so it is possible to find Orks from different klanz in a Speed Freek force. Of all the known major Ork klanz the Evil Sunz have the most Speed Freeks.

Speed Freek symbols often incorporate lightning, or the Ork glyph "zag", to reflect the idea that these crazed Orks prefer to strike hard and fast. Many Speed Freeks, most notably the Evil Sunz klan, will usually have their vehicle painted red from grille to exhaust. A superstition held by the Orks that, "da' red 'uns go fasta!" The habit of painting vehicles red has its roots in the ritual covering of the Ork's mounts with the blood of the foe, a practice that is still observed by some of the older Evil Sunz tribes.

Speed Freeks symbols often incorporate lightning, or the glyph "zag", to reflect their preference for striking hard and fast 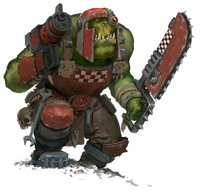 An Evil Sunz Ork and member of the Kult of Speed 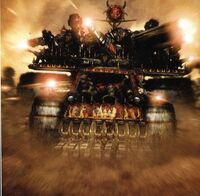 Ork Speed Freeks from the Blood Axes Klan
Add a photo to this gallery
Retrieved from "https://warhammer40k.fandom.com/wiki/Speed_Freeks?oldid=269185"
Community content is available under CC-BY-SA unless otherwise noted.