Note: This article discusses material that was once considered canon but whose canonicity is now questionable.

It is not entirely clear whether the Space Sharks are a separate Chapter or are the same group of Astartes as the recently returned Carcharodons Chapter that also took part in the Badab War. The fact that the Carcharodons referred to themselves as "Carcharodons Astra" or "Space Sharks" in High Gothic increasingly points towards both Chapters being one and the same.

There is speculation that the Space Sharks was a Successor Chapter of the Raven Guard, although this would seem unlikely due to the Raven Guard's depleted numbers during the Second Founding following their losses in the Drop Site Massacre on Istvaan V at the start of the Horus Heresy. It is also believed by some that the Space Sharks may be a Successor Chapter of the White Scars because part of the scouting company of that Space Marine Legion got separated from the rest of the Legion during the Horus Heresy and that upon returning after the end of the Heresy they formed their own Space Marine Chapter specialising in the use of Scout Marines.

The Space Sharks wear grey Power Armour with a red helm stripe. The Space Sharks also use a camouflage variant which is all yellow with black markings. The left shoulder plate is painted brown.

The Space Sharks' Chapter badge is a black shark, viewed from the front, with its mouth gaping.

In the original iteration of the Badab War which appeared in the Warhammer 40,000 Compendium, the Space Sharks Chapter took part in the Badab War fighting on the side of the Loyalists against the Secessionist Chapters. During this conflict, the Space Sharks used their longstanding tactic of Drop Pod assaults in their attacks on the hive cities of Badab Primaris. The Space Sharks' large number of Dreadnoughts and their full reserve of Terminator Armour were used to help the Star Phantoms' sieges of the rebellious Chapters. After the defeat of Lufgt Huron's rebellion, the Space Sharks were given the homeworld of the rebellious Mantis Warriors.

In the Badab War's newest iteration released in Forge World's Imperial Armour Volumes Nine & Ten - The Badab War - Part One and Part Two, the name of the Space Sharks Chapter has been changed to the name Carcharodons or "Carcharodons Astra" in High Gothic. In the updated background information the Carcharodons is a suspected Successor Chapter of the Raven Guard. At the end of the conflict, it raids the Endymion Cluster, the home of the Mantis Warriors, and there, with the agreement of the Fire Hawks, they strikes at the Tranquility System, whose worlds were once the primary recruiting and training grounds for the Mantis Warriors. From these worlds the Carcharodons harvest an entire generation of recruits to renew their own losses, forcing those selected as Aspirants to fight to the death to prove their worth to join the ranks of the Carcharodons' Battle-Brothers. The Carcharodons' Chapter fleet then departs for the outer void once more. 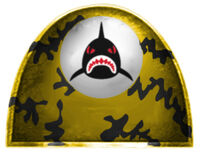 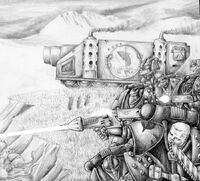