"By thy colour will he know thee,
By thy banners will he fear thee,
By thy standard will he dread thee,
Cry Marine, and let spit the weapons of war."

A Space Marine Standard is the sacred battle standard of a Space Marine Chapter or an individual Space Marine company and is usually displayed by the Chapter or company Honour Guard. These battle standards are possibly the most revered of all of a Chapter's artefacts. Each standard has proudly flown over hundreds of battlefields and every Battle-Brother will understand every nuance and historical reference that has been woven into their lavish designs. A Space Marine Standard is usually carried by a Veteran Astartes who bears the title of "Ancient."

Since ancient times, standards have been used as an inflexible but mobile image, which displayed (and often honoured) as a formal, visual symbol of a powerful individual, nation, or military unit. Standards are often used as a rallying point for troops and to mark the location of an army's commander. In the chaos of battle, soldiers needed to be able to determine where their surrounding unit was and to distinguish between friend and foe. The use of standards in battle is thought to have originated in Ancient Gyptus (Egypt) many millennia ago. The Romani Empire also made battle standards a part of their vast armies in the form of legion vexillum or standard poles. Their use was formalised in the armies of Europe in the High Middle Ages, when standards were emblazoned with the commanding noble's coat of arms. As armies became more professionally trained and adopted set formations during the early modern period of the Age of Terra, each regiment's ability to maintain its formation was crucial to its, and its army's, success.

The practice of carrying a standard into the heat of battle was re-instituted during the Wars of Unification in the late 30th Millennium to reunify Terra beneath the single rule of the Emperor of Mankind, by His ancient Thunder Warriors, gene-enhanced warriors created by the Emperor who served as the precursors to the present-day Space Marines. This tradition was continued amongst the Space Marines of the ancient Legiones Astartes. Often a hand-picked Veteran Marine was chosen to become his Legion's Standard Bearer, or Ancient. These specially-chosen individuals were consummate warriors, selected for the great honour of carrying one of the Legion's standards, making them a rallying point on the battlefield for the Legion's troops. These Astartes were members of Legion Command Squads, had access to the finest wargear available to the Space Marine Legion's rank-and-file and embodied the Legion's honour in war.

Chapter Banners, or Ceremonial Standards, are the most sacred artefacts belonging to a Space Marine Chapter of the 41st Millennium. These banners are ancient and are only ever carried into battle by the appropriately named Chapter's Ancient. Each standard is an ancient relic, steeped in history and heavy with the glories of the Chapter. They bear the insignia of the Chapter, together with sacred motifs and battle honours acquired in past wars and campaigns. When not in battle, these ceremonial standards are usually hung in the Chapter's Reclusiam and revered as sacred embodiments of the fighting spirit of the Chapter. Many of these standards are ancient and venerable relics which have been carried into battle time and time again by generations of Astartes. Old, tattered and fragile banners are devoutly restored, and new battle honours added to them.

The banner is as individual as the Chapter itself and there are few rules to govern its design. The Codex Astartes limits its comment on the Chapter Banner to simply saying that the standard should carry the colours and icon of the Chapter and should display such honours as the Chapter Master deems worthy. The specific design varies greatly from banner to banner, but all will evoke one of the Chapter's greatest triumphs or some other key moment from its long history.

It is quite likely that a Chapter will in fact own a number of Chapter Banners although one, and only one, will be in use at any given time. This battle standard will have been consecrated by the Chapter's senior Chaplain and dedicated to the heroes of the Chapter's past, present and future. In battle the banner is used to inspire the Space Marines to superhuman feats of martial prowess and woe betide the enemy that threatens this holiest of relics. Eventually these banners age or are damaged beyond repair and will then be retired to grace the great hall of a Chapter's fortress-monastery. Furthermore, new Chapter banners may be fabricated to mark great victories or to honour mighty heroes who have fallen in battle. For a Chapter with a long history like one of the First Founding, there will be dozens of these venerable and venerated flags in the great hall, each one carefully preserved and honoured by the Space Marines.

Every Chapter has its own heroic tales and legends associated with its battle standards. One such story concerns the banner of the Lamenters. After their involvement in the Badab War, their banner was but a tattered remnant, having been in the very midst of the worst fighting. When the Lamenters were granted the Emperor's forgiveness for their part in the rebellion, the banner was handed over to the Adeptus Sororitas to be restored and purified. Their handiwork was indeed inspired by the Emperor Deified, and it is said that they wept as they wove, contemplating the Emperor's great sacrifice for Humanity. The banner became known as the Banner of Tears and was taken with the Lamenters on their penitent crusade.

Similarly, a Company Standard represents the honour of each individual company in a Chapter and its commanding officer. The Company Standard is a great source of pride for each company, and several traditions have developed around it, stemming back to ancient times. Each standard is a relic, steeped in history and heavy with the glories of the Chapter, and every Space Marine, from the most inexperienced recruit to the hoariest veteran, fights all the harder in its august presence. The Company Ancient is trusted never to let his banner out of his grip while he still draws breath -- to do otherwise is to invite the most terrible and shameful dishonour. Any sort of disgrace towards a Company Standard is considered a grave dishonour, especially to those who would dare to desecrate or steal a standard, which is considered one of the basest of treacheries. In the heat of battle, the Company Standard is used as a rallying point during the din and confusion of war, and often times serves to boost morale and inspire a company's Battle-Brothers to great feats of valour.

When a Chaplain marches to war, he often leads a Reclusiam Command Squad. Assigned to one of the ten companies of the Chapter, he is a commanding figure on the battlefield. As an overseer of sacred rites and a conductor of solemn rituals, a Chaplain is vitally important to the strength and morale of his company. The Standard Bearer of a Reclusiam Command Squad has the honour of carrying a Sacred Standard into battle, a worthy and honoured burden. This ancient standard embodies the faith and resolution of a Chapter's Battle-Brothers and helps bolster their resolve against the most dire of foes. As each Chaplain is one of the keepers of the Chapter's Reclusiam, the shrine within a Chapter's fortress-monastery, this means that many of the company's most sacred relics are under his stewardship. The bearer of such items feels the shades of Battle-Brothers long past looking down in judgement and approval. A company has many banners, and a Chaplain may authorise the Standard Bearer to bring out one of the oldest and most glorious banners in order to inspire his Battle-Brothers against a particularly potent enemy.

The display of Back Banners is a manifestation of many Chapters' conception of war. Any Battle-Brother can be equipped with a telescopic aerial on his backpack, complete with integral Chapter, specialist or squad banner. These banners are used on ceremonial occasions, and are often displayed in battle to help identify specialist units. It is common practice for one member of each squad to display his banner, which acts as a focal point for the rest of the squad, and marks its progress on the battlefield. Volunteering to display the banner is considered an act of heroism and a privilege eagerly sought.

An outstanding example of this has been passed down in a legend dating back to the 30th Millennium during the time of the Great Crusade. Several Astartes detachments from different Legions had been assembled for the final assault on the enemy positions, but victory was by no means assured; the battle, and consequently the outcome of the war, was held in the balance. It was as if the gods of war were witholding their judgement, and were waiting to see which side was most worthy of victory. Then the divine inspiration of the Emperor of Humanity descended upon the commander of the detachment, and he gave the order; "Let the banners be flown, for this is the moment of destiny." Thereupon, in each and every unit along the entire battle line, the Astartes' heraldic Back Banners were unfurled, and it was as if a great wave had rushed along the ranks. Then the commander gave out a cry saying, "The gods of war are with us!" The entire line advanced with weapons firing and the victory was ultimately won.

The Blood Angels Chapter Banner as a vexillum; the banner staff commemorates the Blood Angels' origin as the original IX Legion of Space Marines of the First Founding

Ultramarines Legion Banner; these large, fabric banners were individually commissioned by Legion High Command and issued to Chapter sub-commands, often in honour of a great victory and a symbol that the Chapter's commanding officer bore the authority of the Primarch and the honour of the entire Legion

The Banner of Macragge, Ultramarines Chapter Banner as a vexillum; the banner staff commemorates the Ultramarines' origin as the original XIII Legion of Space Marines of the First Founding 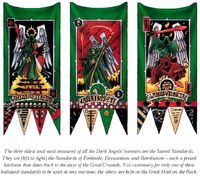 The three Sacred Standards of the Dark Angels Chapter; from right to left, the Standards of Fortitude, Devastation and Retribution

The Word Bearers made extensive use of a wide range of banners, icons and vexillas at every level of the Legion's command structure. Initially derived from the runic script of ancient Colchis, the banners have come to display ever more disturbing and debased symbols as the full extent of the Legion's treachery and corruption was revealed.

Company Banner of the Blood Angels 2nd Company, "The Blooded"

Blood Angels 2nd Company Sergeant Borgio's Back Banner; Borgio's banner bears a number of Purity Seals won over many years of service to the Chapter, and a personal honour badge earned in the Blooded's assault on the Mirrorfane fortress

Back Banner of the Ultramarines' Master of the Forge Fennias Maxim

Back Banner of the Ultramarines' Chief Apothecary Corpus Helix

Back Banner of the Ultramarines' Master of Sanctity, Ortan Cassius

Back Banner of Ultramarines Chief Librarian Tigurius
Add a photo to this gallery
Retrieved from "https://warhammer40k.fandom.com/wiki/Space_Marine_Standard?oldid=311592"
Community content is available under CC-BY-SA unless otherwise noted.