The Space Marine Landing Craft is a super-heavy landing craft that is used by the Space Marines of the Adeptus Astartes. This massive craft is designed to quickly deliver troops, vehicles and supplies to a planet's surface from orbit, much like its smaller cousins the Thunderhawk gunship and the Thunderhawk Transporter.

The main difference between these craft, however, is that the lander can carry entire detachments of Space Marines and their supporting vehicles, more than twice the complement of the Thunderhawk.

The Space Marine Landing Craft is loaded with its cargo in cavernous hangers aboard Astartes starships in orbit, and once it leaves its parent ship powerful thrusters quickly propel the craft at speeds of several thousand kilometres a solar hour towards the surface, making it nearly impossible for enemy anti-air batteries to target it as it plummets through the atmosphere.

The craft hurls itself at velocities impossible for all but a Space Marine to endure, and just seconds before hitting the ground ballistic charges blow away the disposable heat shields protecting the more vulnerable parts of the landing craft and the vehicles it is transporting. After the heat shields are cast aside the landing craft's powerful secondary engines and esoteric anti-grav devices are employed to rapidly slow down and level out the ship's descent, finally allowing it to touch down safely upon the surface. Before the lander even comes to a complete stop its many weapon systems swing into action, hatches slam open to allow the infantry inside to deploy and the hydraulic locking clamps holding any vehicles in place are released.

Within twenty to thirty solar seconds of leaving the orbiting starship, the full capacity of the Space Marine Landing Craft can be on the ground and ready for combat, supported by the craft's mounted gun batteries. Due to the lander's massive size and the large amount of ammunition carried aboard, if a lander is hit during planetfall or destroyed after landing it will likely be completely annihilated, along with its entire cargo, producing a massive explosion capable of severely damaging anything caught in the blast.

The Space Marine Landing Craft is heavily armed to support disembarking troops and vehicles, and as long as it remains on the ground it can act as a mobile stronghold and fall-back point for all Astartes forces on-planet. The craft is armed with two sets of turret-mounted Lascannons, one located on each of its rear wings, above its main thrusters on the top of the ship's hull.

The central spine of the lander is dotted with three remote-controlled pintle-mounted Storm Bolters for anti-infantry defense, and three sets of remote-controlled turret-mounted twin-linked Heavy Bolters that are located on the ship's wings and one near the cockpit.

The Space Marine Landing Craft can carry a large number of units into combat including but not limited to: 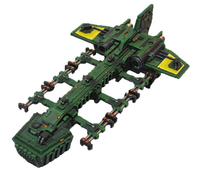 A Space Marine Landing Craft
Add a photo to this gallery
Retrieved from "https://warhammer40k.fandom.com/wiki/Space_Marine_Landing_Craft?oldid=335451"
Community content is available under CC-BY-SA unless otherwise noted.