For the board game, see Space Hulk (game)

A space hulk is the term given by the Imperium of Man to the wreckage of a starship or a mangled twist of various starships and artificial debris found drifting through the vacuum of the Milky Way Galaxy without apparent direction. Many times they are so huge that they have their own atmosphere and gravity. Since the hulks often exit and re-enter the Warp seemingly at random, searching or traveling within them is dangerous in the extreme.

Space hulks have many times been used as a means of transport by certain unsophisticated factions. The Orks, the Genestealers, and even Heretic Astartes Renegades use them occasionally to invade other worlds. As the Warp jump of space hulks is essentially made in a random direction, this gives them the advantage of surprise over Imperial or Asuryani forces. These monstrosities often drop in and out of the Warp, threatening to carry Chaos Space Marines, Orks or Genestealers that have entered stasis who can launch attacks upon the unsuspecting planets of the Imperium.

The Imperial Navy, and all Imperial forces and authorities as a whole, have standard orders to survey such objects and to report their location. The hulks often consist of starships and items of technology millennia old, and the recoverable technology can be of immense value to the Imperium, and especially to the Adeptus Mechanicus. Thus elite Imperial forces are sent aboard to clear out infestations and determine if anything aboard the hulk is valuable enough to merit recovery.

Depending on the strategic situation (availability of troops, proximity to vital Imperial star systems, safety margins, etc.) Space Marines are usually sent to purge the hulk of any alien or Chaos infestations. The reason for this intense interest is that space hulks have been adrift in the void often for hundreds or even thousands of Terran years, forming an unrecognisable huge mass, in which technological and scientific bounties from the Age of Technology could be stowed that would be of great commercial value.

Many space hulks are known to be breeding grounds for the Tyranid species known to the Imperium as the Genestealers, often being the product of a starship inflicted with a Genestealer infestation where the Genestealers took over and killed the crew. It is even suspected by the Adeptus Mechanicus' Magi that the Tyranid Hive Mind implants Genestealers to lay in stasis on space hulks to purposely serve as unwitting living vanguards for a nearby Tyranid hive fleet intent on finding new worlds to consume. Congruent with the expansive bio-mass consumption of the Tyranids, these Genestealer-infested space hulks are doubly dangerous for the cargo they may contain and the Hive Fleets they could psychically call down upon an inhabited planet.

As a result of the dangers, the mission of boarding and exploring space hulks is normally entrusted to Terminators, an Astartes Chapter's most experienced elite warriors who are heavily armed and protected by Tactical Dreadnought Armour. In some cases this is an impossible task, due to powerful enemy resistance, too few available Imperial troops, the space hulk being too close to vital Imperial star systems, etc. In such cases the bombardment and total destruction of the hulk is the only viable alternative. However, space hulks are huge and durable, and even Nova Cannon blasts are not always powerful enough to destroy one. 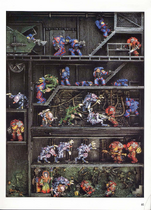 A 1st Edition-era depiction of the space hulk Death of Integrity being cleansed of Genestealers by the Novamarines Chapter. (Diorama by Mike McVey)
Español
Community content is available under CC-BY-SA unless otherwise noted.
Advertisement