The Soulreaper Cannon is a ballistic heavy weapon utilised by the Heretic Astartes of the Thousand Sons Traitor Legion and other Chaos Space Marine forces dedicated to the Chaos God Tzeentch. It is a heavy rotary cannon very similar to the standard Adeptus Astartes Assault Cannon. However, the Soulreaper Cannon is an Inferno Weapon whose ammunition has been enhanced by Tzeentch's sorcerous power to be able to melt through flesh and ceramite both. 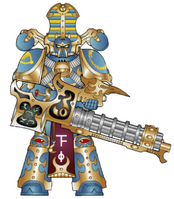 A Soulreaper Cannon utilised by the Thousand Sons.
Add a photo to this gallery
Retrieved from "https://warhammer40k.fandom.com/wiki/Soulreaper_Cannon?oldid=322378"
Community content is available under CC-BY-SA unless otherwise noted.